Chris Rogers scored a crucial half-century, his second of the match, on Day Four of the second Test between India and Australia at The Gabba, Brisbane. Rogers’ fifty came off just 50 balls. Shane Watson was dismissed by Ishant Sharma for a duck after David Warner was dismissed by Ishant for just six. Ishant got Warner to nick one behind to MS Dhoni. India were bowled out for 224 after Shikhar Dhawan scored a battling 81, and in partnership with Umesh Yadav helped India take a lead of 127. Dhawan and Umesh’s partnership came at a time when India were in serious danger of folding up for well under 200.

Shikhar Dhawan was dismissed for 81. Dhawan was out LBW to Nathan Lyon after batting beautifully with Umesh Yadav. Dhawan scored a fighting half-century off just 101 balls. Earlier, Cheteshwar Pujara was dismissed by another short ball from Josh Hazlewood, as India slumped to 143 for seven.

Fuming Ishant Sharma leaves Gabba because of no vegetarian food 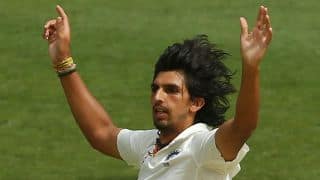