Kohli looked out of sorts in his brief stay at the crease.

Virat Kohli bowled by Mitchell Johnson on Day Four of the second Test between India and Australia at The Gabba, Brisbane. Shikhar Dhawan was apparently injured in nets after being struck on the arm, so Kohli had walked out to bat alongside Cheteshwar Pujara. 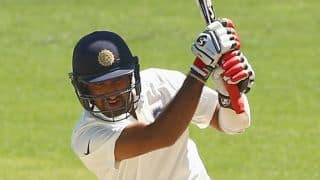