Cheteshwar Pujara scored his second double century in Tests as he helped India bury Australia deeper in runs in the first session of Day Three of the second Test. India took lunch at 400 for three and are 163 runs ahead of Australia. Cheteshwar Pujara scored his second double century in Tests as he helped India bury Australia deeper in runs in the first session of Day Three of the second Test. India took lunch at 400 for three and are 163 runs ahead of Australia.

Eighty-nine runs were scored in the session as Murali Vijay (167) and Pujara (204) continued to pile on the misery on the Australians. In the first hour of play, the Indians were a little watchful and played calmly, thereby reducing their run-rate to under three. But the pair continued to grind the Australian bowlers, who prepared themselves for another long day in the sun.

Soon enough, Vijay got to his first ever 150 in Test cricket. The Chennai lad got there by flicking Peter Siddle off the legs wide of mid-on. He took 332 balls, including 20 boundaries and two sixes. Pujara, meanwhile, on 187 not out, became the second-fastest Indian batsman to reach 1,000 runs in Test cricket. The 25-year-old got there in his 18th innings, which is four more than what Vinod Kambli took to reach the milestone.

Australia finally managed to break through the barrier of the mammoth, record second-wicket partnership as debutant Glenn Maxwell got his first wicket in Test cricket. Bowling around the wicket, Maxwell’s delivery took an extra bit of bounce off the pitch as Vijay tried to work it off his legs. However, the Indian opener was foxed by the bounce and the edge carried to Ed Cowan at leg-slip.

The wicket broke an Indian record second-wicket partnership. The 370-run stand left behind the previous best of 344 by Sunil Gavaskar and Dilip Vengsarkar against the West Indies at Kolkata in 1978-79. It was also the second-highest Indian partnesrship ever for all wickets, falling just 43 runs behind the 413 hit by Vinoo Mankad and Pankaj Roy in 1956.

Pujara, still hobbling after hurting his knee while running on Day Two, then notched up his second double century of a short 11-match career, with none other than Sachin Tendulkar for company. However, he was to fall to James Pattinson soon after as he tried to hook the Australian quick over square. The ball took the top edge and flew to long leg where Xavier Doherty latched on to a superb catch. Pujara was gone for a superb 204 off 341 balls, most of which were scored with a limp.

Getting rid of both Vijay and Pujara would have given the Australians some motivation going into lunch. However, being 163 runs behind, with batsmen like Tendulkar, Virat Kohli and MS Dhoni still to get rid of, the outlook is more than bleak. 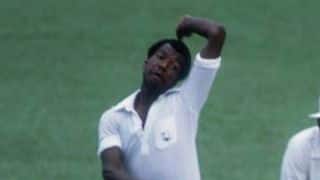