Fortunes did not change for India. Their batting line-up yet again fell prey to an Australian spinner. Nathan Lyon, who took as many as 8 wickets, also became the highest wicket-taker for Australia against India.

Australia trail by 149 runs on Day One of the second Test at Bengaluru’s M Chinnaswamy Stadium. Fortunes did not change for India. Their batting line-up yet again fell prey to an Australian spinner. However, Steve O’Keefe was not in the thick of things. He could grab only a wicket. In fact, it was his senior partner Nathan Lyon who took as many as 8 wickets, also becoming the highest wicket-taker for Australia against India. He now has 58 Indian wickets to his name, surpassing Brett Lee’s tally of 53. Meanwhile, KL Rahul scored a characteristic 90 amidst India ruins.

After electing to bat first, India could manage only 189 all-out. Barring Rahul, no other batsman looked comfortable at the crease. For that matter, Rahul was dropped twice but made full use of his luck and added as many runs he could to India’s total. He looked edgy, even out of sorts at time. A few deliveries went past the slip cordon. But he did not let the minor setbacks dictate terms and held India’s innings together. What commendable about the innings was that he scored only 9 fours, dealing most part of his innings in ones and twos. Full cricket scorecard: India vs Australia, 2nd Test

Australia made early inroads. They dismissed Abhinav Mukund, who replaced the injured Murali Vijay, for a duck. Making a comeback after a span of 6 years, his innings lasted for only 8 deliveries as Mitchell Starc trapped him in front with a vicious yorker.

Situation only worsened for India. They lost Cheteshwar Pujara just an over before lunch. Besides, Pujara’s wicket was first of 8 wickets Lyon took. Full cricket updates: India vs Australia, 2nd Test

In the second session, India lost Virat Kohli, Ajinkya Rahane, and Karun Nair. Each of these players had a decent start but failed to make the most of it. While Lyon got the better of Kohli and his deputy, O’Keefe outfoxed the triple-centurion with his finger spin.

The second session saw India losing as many as 5 wickets in 33 runs, eventually getting bowled out for 189.

In reply, Australia scored 40 for 0 at the end of day’s play, with David Warner unbeaten on 23 and Matt Renshaw on 15. 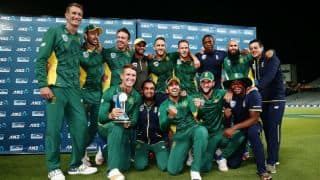 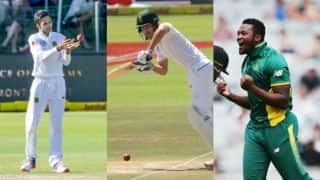