Australia went into lunch at 87 for 2, trailing by 102 on Day 2 of the second Test against India at Bengaluru's M Chinnaswamy Stadium. Well bowled. Well played. Good cricket all around. That was the story of session one.

Australia went in to lunch at 87 for 2, trailing by 102 on Day Two of the second Test against India at Bengaluru’s M Chinnaswamy Stadium. Well bowled. Well played. Good cricket all around. That was the story of session one, for both teams displayed magnificent show of character, displaying top-drawer cricket. For that matter, David Warner started off with a boundary down the leg-side. At the receiving end was Ishant Sharma. Thus began India’s race against time. There was no margin for error for either teams. If India stray down, Australia would pounce on it and score more runs. If India bowl in the right channel, there are more chances of Australians getting out and further get in a shell. The session one, in fact, was more about the Australians than the hosts. FULL CRICKET SCORECARD: India vs Australia, 2nd Test at Bengaluru

Warner then played one on the up, scoring another boundary off Ishant Sharma. From the other end was Ravichandran Ashwin in action. He came round the wicket against the southpaws, with forward short-leg, square-leg, and fine-leg. The tactic that usually looks defensive was turned into an attacking one. India were looking for wickets and Australia runs. The ball turned square, it kept low, it held its line, it beat the outside edge, it went just past the stumps. Ashwin had the crowd on its feet. On the other hand, Ishant bowled in the corridor of uncertainty. He kept a lid on the runs. So did Ashwin. That put pressure on the Australians, eventually resulting in a wicket. Ashwin hit the rough Mitchell Starc had created. He pitched the ball outside leg and uprooted the off stump. By the time Warner could react, Kohli had started punching in the air. He was in his own world. India drew first blood. Full cricket updates: India vs Australia, 2nd Test, Day 2

Steven Smith came. He shuffled. He left deliveries. He flicked a few. Ishant mimicked Smith. Kohli, in the slip cordon, had a laugh. Nothing but entertainment was on offer. An over before that Ashwin and Matt Renshaw bumped into each other while the bowler was trying to save a single. Kohli stared at Renshaw, signalling the opener to not do it again. Smith then had a word with Kohli. The umpires had to get involved. The Border-Gavaskar trophy 2016-17 was on fire.

Kohli replaced Ishant-Ashwin with Umesh Yadav-Ravindra Jadeja. Umesh was unfortunate, though. Three of Renshaw’s outside edges went past the slips. He would have had Renshaw but was on the wrong side of the luck. Meanwhile, Smith played over 50 deliveries but could not score a four. He eventually inside-edged off Jadeja to forward short-leg, and India got the big fish just before lunch. Renshaw, on the other hand, remained unbeaten on 40 off 144.

All in all, session one garnered only 47 runs involving two big wickets of Smith and his deputy Warner. 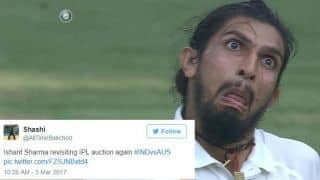