Michael Clarke has termed Australia captain Steven Smith’s act of seeking help from the dressing room on a Decision Review System (DRS) call ‘unacceptable’. The incident took place on the fourth day of the second Test in Bengaluru, when Smith was trapped in front of the wickets by Umesh Yadav. Smith had a brief discussion with the non-striker Peter Handscomb. Later both the batsmen turned towards the Australian dressing room for suggestion, with Smith making a hand gesture as to specify what they should do. The umpire Nigel Llong was swift enough to spot their intention and asked Smith to walk back to the pavilion.Full cricket scorecard: India vs Australia, 2nd Test at Bengaluru

The laws of the game demand that players must make such decisions without any help from outside the field. The batsman can only consult his partner; non-striker before taking a decision on DRS. The batsman cannot seek help from the umpire or the team. Clarke felt that if Australia have taken help from the dressing room, then that’s unacceptable.

Clarke, while speaking to India Today said, “I want to find out from the Australian team if they’re using the DRS in that way, if they are then that is unacceptable. My concern and my worry is that when you look at the footage of what happened with Steve Smith, Peter Handscomb … actually suggests to Steven Smith to turn around and have a look at the support staff.”

“If it is only a one-off, I don’t think that would have happened. The fact that Peter Handscomb is even thinking about telling the Australian captain to turn around and look to the support staff, I’ve got my concerns.” Clarke added.

Kohli, while addressing the press in a post match press conference, had accused Smith and company of taking suggestion from dressing room. He explained, “I saw that two times happening when I was batting out there. I pointed it out to the umpire as well, that it has happened twice, that I’ve seen their players looking upstairs for confirmation, and that’s why the umpire was at him.”

He further added, “When he turned back, the umpire knew exactly what was going on, because we observed that, we told match referee also, and the umpires, that they’ve been doing that for the last three days and this has to stop.” 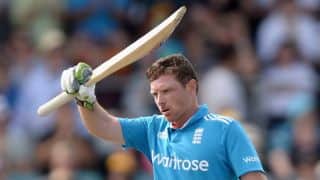