Australia bundled out India for 189 on Day One of the second Test at Bengaluru's M Chinnaswamy Stadium, courtesy Nathan Lyon's 8 for 50.

Australia bundled out India for 189 on Day One of the second Test at Bengaluru’s M Chinnaswamy Stadium, courtesy Nathan Lyon‘s 8 for 50. In the process, Lyon became the highest wicket-taker for Australia against India, going past Brett Lee. However, amidst India ruins, KL Rahul scored a characteristic innings of 90. Despite losing partners from the other end, he displayed magnificent show of character and held India’s innings together. Though Karun Nair tried to make amends, he was outdone by Lyon’s off-spinners. Full cricket scorecard: India vs Australia, 2nd Test

India’s plan was to post a big first-innings total after electing to bat first. Given the track was unlike the diabolical one in Pune, a big score was on the cards. However, Mitchell Starc dismissed injured Murali Vijay’s replacement Abhinav Mukund for a duck, making an early inroad. At No. 3, Cheteshwar Pujara survived 65 deliveries before he inside-edged one to Peter Handscomb at forward short-leg, thus giving Lyon his first of the 8 wickets. India went in to lunch at 72 for 2, with Rahul unbeaten on 48. Full cricket updates: India vs Australia, 2nd Test

In the second session, Lyon and O’Keefe ran through India’s middle order and reduced them to 168 for 5 at tea. The likes of Virat Kohli, Ajinkya Rahane, and Nair could do very little to keep the spin duo at bay.

The first half of the last session for India was a disaster. They lost the last 5 wickets fell in a matter of 31 runs, gifting Lyon a stunning 8-wicket haul. 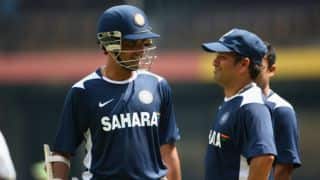