Langer praised the tough attitude of his young side in the 31-run loss in the first Test against India, but added that the visitors thoroughly outplayed them.

Australia coach Justin Langer has praised the tough attitude of his young side in the 31-run loss in the first Test against India, but added that the visitors thoroughly outplayed them in the series opener of the four-match series. Langer also hoped for a juicy wicket at the new Perth stadium that will host its first-ever Test from Friday.

“A lot of coaches who lose say the same thing. There’s a lot of really positive stuff. We got so close, didn’t we? There were a few key moments in the game but overall we fought really well, we fielded really well, there was great energy. We caught well, and probably just didn’t spend as much time in our partnerships with our batting as we would have liked,” said Langer before departing for Perth.

“Two out of the last three Tests the Australian cricket team’s shown great fighting spirit to draw in Dubai and we just lost yesterday. We’re getting closer with this young team,” said Langer.

He said the the pitch got easier to bat on and on day five, Australia almost pulled off a record chase.

“I knew that it’d get easier to bat on the drop-in wicket in Adelaide. Unfortunately we just weren’t able to (string partnerships) as we were losing wickets at crucial moments. If we’d have been two or three down overnight it might’ve been a different ball game, but it wasn’t the case.

“India outplayed us, there’s no doubt about that. There was no point in the game where I felt we were on top of India. To their great credit they were more patient than us and they bowled really well,” he said.

The new stadium at Perth has hosted only a couple international games, and this will be its first big game with the Indian team coming to town. A fast and bouncy pitch is the talk of town for the maiden Test at this new stadium.

“Hopefully that’s what it was traditionally at the WACA, and that’s what we’ve talked about for a long time, pace and bounce. If we can get that, it’d be a great thing for Test cricket,” said Langer.

“I’m really fascinated and can’t wait to see what the Optus Stadium wicket brings. There’s been one four-day game in its history there. I went and watched a bit of the Shield game, New South Wales and Western Australia. There was certainly some pace and bounce.

“We’ve seen some pace and bounce in it during the ODI and T20 games, plus a fast outfield. Again it’s an unprecedented period – first Test match on a drop-in wicket in Perth at the new stadium. Time will tell what the wicket brings,” said the former Australian opener.”

Australia have retained the same squad for the second Test, and there have been no additions to cover for Tim Paine, who was hit on his right hand during the second innings. Pacer Chris Tremlain hasn’t joined the squad, so it will be a 13-man team in Perth.

The big question for the Australian team management would be if they want to include Mitchell Marsh as the fifth bowling option.

“Paine is the toughest pretty boy I’ve ever met in my life. Even if it were snapped in about four places he’d still be right. He’s absolutely fine. He’s obviously had issues with it before but he is 100 per cent ready to go,” he said.

“Chris Tremain’s not coming over so we’ve got 13 instead of 14. The three quicks pulled up really well (in the first Test). Peter Siddle’s ready to go if we need him to play the Test match, otherwise it’s the same squad.

“They’ve had a couple days off. I would’ve had three or four days off, but India are in exactly the same situation. It’s probably the one area where we just felt we’re not wearing down the Indian bowlers enough this Test match. It’s going to be hot on Friday and it’ll be an important toss I would imagine.”

But Langer urged his batsmen to show more patience in the middle if they are to counter the Indian bowling line-up.

“One of the things we talk about is partnerships and patience, building pressure on the opposition. So it’s one of the important virtues of being a successful Test cricketer.” 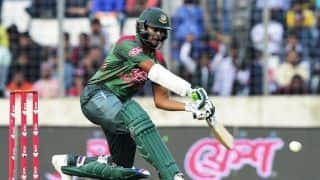