Ranchi: Australia team’s assistant coach David Saker feels that was still ‘evenly-poised’ terming Cheteshwar Pujara‘s gritty century as a “fantastic effort”. “We really put them under pressure a lot of pressure. They absorbed them, especially Pujara who played a fantastic innings. In the middle session, I think they had the better of us. It’s just great test match cricket,” Saker said at the news conference after the day three’s proceedings. Playing through the whole day, Pujara remained unbeaten on 130 in his stay at the crease for nearly eight hours. “It’s great Test match cricket. The first and third sessions were as good as I have seen Australians play. It’s quite evenly poised.” Full cricket scorecard: India vs Australia, 3rd Test

At the moment, the Aussies are 91 runs ahead but with Pujara holding fort at the moment, India’s chances are getting brighter. “We’re still nearly just under 100 runs ahead, we are still ahead of the game but they are getting closer every over.” Indian skipper Virat Kohli was seen clapping from the balcony after Australia exhausted their DRS quota in the first 80 overs. With Aussies running out of review, Murali Vijay on 58 survived as he had a faint edge to be taken at short leg but umpire ruled it out and Aussies did not have any choice. “I know he came out and clapped, I don’t know if it was directed at anyone in particular but that’s the way he (Kohli) has been playing this series,” Saker said.

“It’s a really cut-throat series for everyone and it’s first versus second, there’s a lot of pressure on him (Kohli) at the moment. And there’s pressure on everyone at the moment. I don’t think it was directed at anything, I just think when you lose your two reviews it s a bit of a relief to the opposition and he probably just showed that.”

Saker went on to praise Glenn Maxwell for his exceptional fielding at mid-on to save a boundary as the three runs by Pujara off Pat Cummins brought Kohli on strike and the next ball he was dismissed for six. “It’s very satisfying getting Virat Kohli out cheaply, that’s for sure. There is not set plan as to how we are going to get him out, we just try to put as much pressure on certain batters when they come in.

“That chase kept Virat Kohli on strike, we got the wicket very next ball so little things like that are really important for us. We will keep concentrating on things like that.”

After injuring his shoulder, Kohli was back to bat at number four after missing out of action on half of the day one and the full second day. “If players have got upper body injuries then sometimes you are trying to bowl some short balls to them and make them move quickly. But on that surface, it’s probably only Patty Cummins would have been the only one able to do that, and one of his first balls to him he got him out.”

“So we didn’t need to go to that. But we didn’t really talk much about that. We just know how good a player he is, we just make sure we do what we can to get him out and at the moment we have got the better of him. But we know he is such a good player that he could bounce back at any time.”

Pacer Pat Cummins, who played his last Test way back in November 2011, made a splendid comeback as he troubled Indians with his sharp rising deliveries en route to his 4/59.

“Hats off to the selectors to go with him. Ball speed in India is a big thing because the wickets don’t generate any pace. But he was way higher than the expectations we had. We know what talent he is but it s so pleasing to see him go so well,” Saker said.

Saker said that he had no restrictions imposed on Cummins’ as to how he would go about the bowling. “We didn’t have any restrictions on him throughout this Test. It is a really important Test match for us. If he ends up bowling more overs than fist expected then so be it. It s tough cricket over here and because he’s bowling so well the captain will want to keep going to him.”

“I can’t see him bowling too many overs tomorrow and maybe if we do have a bowl on the final day, I think it will be more a spinning wicket. He s done a great job so far.

With Pat Cummins making a splendid return it’s an exciting time for Aussie pacers and Saker predicted a headache for the selectors when pace spearhead Mitchell Starc returns after recovering from the sress fracture.

“It’s really good to see. Patty (Cummins) today going really well, Josh and Mitch had a fantastic summer. Then we ve got Jimmy (James)Pattinson, the way he is come back in the last few Shield games and he’s got another chance in a Shield final, so that s really good for him and good for Australian cricket.” 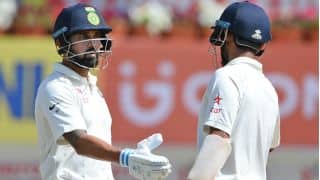