India vs Australia, 3rd Test: Have to come up with plan to combat Ravindra Jadeja, says Darren Lehmann

India vs Australia, 3rd Test: Have to come up with plan to combat Ravindra Jadeja, says Darren Lehmann

India dominated Day Four with Cheteshwar Pujara’s patient double-century followed by Wriddhiman Saha’s gritty century at Ranchi. However, it was Ravindra Jadeja’s all-round show that took the cake away. Jadeja not only scored an unbeaten 54 but also ended the day with figures of 2 for 6 claiming David Warner and night watchman Nathan Lyon. Darren Lehmann addressed the media after the day’s play and mentioned that Australia are up for a challenge especially to negotiate with Jadeja’s left-arm spin. However, with Matt Renshaw around, Australia are now trailiing by 129 runs and have 8 wickets intact to keep the game alive. Live Cricket Scorecard: India vs Australia, 3rd Test at Ranchi

“Going to have to come up with a plan to combat Jadeja but we’ve worked on that and you’ll probably see it tomorrow I would think,” Lehmann said after the penultimate day’s proceedings. “They’ve got to believe in what they are doing as a group and a couple of good balls like tonight that can happen in a game of cricket. For us it’s a great challenge. The challenge for our group is to put on a couple of partnerships and really get ahead of the game. It was a great ball that got Warner in the end. If they bowl 10 of those so be it. But we’ve got to cope with it as best as we can and come up with a plan and we’ve done a lot of practice in those conditions, so I’m really confident they can do the job and see how they go. It’ll be a great challenge for them,” Lehmann said.

Left worried to save the third Test, Lehman hoped his boys will replicate the innings played by Pujara and Saha on the final day tomorrow.”Obviously we’ve got to save the game and worry about tomorrow first. It’s a case of obviously applying ourselves much like Pujara and Saha did today,” Lehmann said. Showering praise on Pujara, the Aussie coach said: “He’s very disciplined and played really well. That’s why he is a class player. He bats for a long period of time. His conversion rate from 50 to 100 and 100 to 150 are pretty high.

When he gets in, he likes to go on with it. That’s a challenge for our bowling group. To find a way to get him out early.” Australia were tottering at 23 for 2 after 7.2 overs at stumps on day four with Jadeja cleaning up David Warner for 14 and nightwatchman Nathan Lyon for 2.”Tough to lose those two wickets tonight, they were some good balls for them. Good challenge for the group to put it into practice tomorrow and we’ve got to do that and to deliver on the big stage.”

Terming it a traditional Indian wicket, Lehman said there was no real fear from the pitch at the JSCA International Stadium hosting its maiden Test.”Once the ball gets a little bit softer it plays pretty well so there’s no real demons in the track. You’ve got to prepare for all scenarios here in India, as you’ve seen the wickets start to wear on day four, day five, this has been a really traditional Indian wicket, a good wicket.”

Aussies prepared for rigours of touring India in Dubai and Lehmann said it’s now putting them into practice.”It’s quite a challenge. Preparing for Dubai that’s what we did and now it’s putting it into practice.”With Pujara and Saha playing with utmost patience, Australia were made to bowl as many as 210 overs.

There was much workload for the top four bowlers with left-arm spinner Steve O’Keefe bowling a record 77 overs in India, the most by an Aussie here.Skipper Steve Smith gave only four overs to Glenn Maxwell, something that was questioned by former captain Michael Clarke but Lehmann backed his skipper. 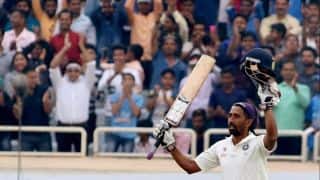