The 3rd Test against India will be Australia's 800th contest. Ranchi will be India's 45th Test venue. However, statistics do not hold much significance in Border-Gavaskar trophy, for it is measured beyond records.

The third Test against India will be Australia’s 800th contest. Ranchi will be India’s 45th Test venue. And if Murali Vijay is found in the best of his health, he will don India’s jersey for the 50th time in the longest format. In other news, Ravichandran Ashwin and Ravindra Jadeja share the No. 1 tag in ICC Test Rankings for bowlers. However, statistics do not hold much significance in Border-Gavaskar trophy, for it is measured beyond records. Form and fortune do not matter, for it is played beyond 22 yards. Full Cricket Scorecard: India vs Australia 3rd Test at Ranchi

When they lock horns, India and Australia do not necessarily live by the supposedly gentlemanly rules of the game. For India and Australia, it is not about clinching the silver-coated trophy. From pointing fingers to coming on the verge of branding the opposition captain as a cheat in the post-match press conference, India versus Australia contest is known for banters on and off the field. From boards getting involved in the war of defence to media houses getting involved in wars of words, battles between India and Australia never fail to raise eyebrows time and again and that is putting things mildly. The 2016-17 edition is no different.

The ball had turned square at Pune. India fell in the trap they had laid for Australia. They had lost the series opener. The ball then stayed low in the second Test, at Bengaluru. Umesh Yadav trapped Steven Smith leg-before. Peter Handscomb walked up to Smith and gestured towards the dressing-room. Umpire Nigel Llong looked agitated.

What happened there exactly? The director did not know where to pan the camera.

Did Kohli say something to Smith? The Australian captain took the long walk. India fought back. 15.1 overs later, India had won the second Test to level the series 1-1.

More than rejoicing the victory, Virat Kohli was hell-bent on bashing the visitors. I did not say that word. You did, said Kohli in the press conference after being asked whether he called Smith a cheat. To cut long story short, Kohli had not said anything to Smith that made Nigel furious. Instead, he saw Smith asking the dressing-room whether to take a review.

The war was far from over. BCCI filed a complaint. Cricket Australia responded. ICC got dragged. The boards decided to call it a truce. Faf du Plessis, in New Zealand, was not happy with ICC s response. Now the world was indulged in Border-Gavaskar trophy. Everyone wanted to have a say.

The talks of the diabolical Pune track, the hype about India making a comeback from the dead, and Bangladesh featuring their trademark pre-mature celebrations somewhere on an island went off radar. The focus shifted to the Smith-Kohli battle inside the battle that was the coveted Border-Gavaskar Trophy.

The Australians responded. There response did not come as a surprise.

To put things in to perspective, it goes without saying that Australians do not like it when the opposition matches their magnitude of aggression. In other words, they do not like the taste of their own medicine. It hurts their egos. That is how they play cricket, and that is how the world has grown up watching them play.

However, that is definitely not what the Indians would settle for. They have Kohli at the helm. They have a player who likes to kill venom with venom. They are prepared to give Australia a dose of their own medicine. They have a captain who leads the charge on the battlefield than put the final nail in the coffin and credit for the glory stroke.

And that is exactly what put the rather aggressive Australia on the defensive.

Alastair Cook is yet to pick up an injury. Mohammad Shahzad swats everything with a violent cross-bat. Rangana Herath picks up wickets by the bucketful. And Mitchell Marsh has been ruled out of the remainder of the series.

Some things in cricket do not change. Then the news breaks that he will not be a part of the upcoming IPL.

Meanwhile, coach Darren Lehman backed his team for the cheat incident (less than four years back he had used the same term when Stuart Broad had refused to walk). The news simply refused to stay out of the headlines. But there was news of greater magnitude to give India respite and Australia further headache: Mitchell Starc flew back Down Under to join the list of injured players. He had a stressed fracture in his right leg. For a change, the nature of the injury did not include his shoulder.

All in all, Australia will be without the Mitchells for the last 2 matches.

While the younger Marsh s contributions were little to none, Starc s absence will hurt them. Australia will be without Marsh s struggle to play spin and Starc s knack of producing breakthroughs. Though Starc was a bit ineffective in the second innings at Bengaluru, his 2 in 2 brought Australia back in the contest. If anything, Australia will miss his in-swingers.

Cummins up soon, all Maxwell and good

I knew I was on standby for the tour a couple of months ago but really I thought the bowlers weren t going to bowl too many overs so hoped they weren t going to be injured or anything like that, Pat Cummins, one of the replacements, told ESPNcricinfo.

Replacing Starc may be difficult, but it will in all likelihood be Jackson Bird on a like-for-like policy. However, who will be the No. 6 batsman who can bowl a bit? Marsh, for all the apparent reasons, was about to be dropped given his performance and his role. He bowled only 5 overs in 2 Tests and hit a couple of sixes. Australia have Glenn Maxwell, an off-spinning all-rounder, and Marcus Stoinis, a fast-bowling all-rounder.

Maxwell was recently named captain of Kings XI Punjab. That does not have to do anything with this series, but he must have heaved a sigh in his otherwise less-productive time in India. But now that a spot is empty, he may as well get a nod ahead of Stoinis. Regardless, it depends how the Ranchi track is dished out.

Let us not forget the fact that the match will be played in MS Dhoni s hometown. Be that as it may, the nature of the track is unlike his brand of cricket. It is slow and low. It is a typical Indian track from Mohammad Azharuddin s 1990s: in other words, while batsmen will have enough time to get behind the line of the ball and pile on runs, bowlers may have a tough time getting in the groove.

On the other hand, if the bounce is uneven we may see an encore of Kohli s and Smith s dismissals from the second Test, and the third umpire will grow more grey hair judging a review.

Kohli says and we quote

I don t regret anything that I have said, but at the same time it is very important not to be stupid and go on about the same thing on a daily basis. I think it was a mature decision on everyone s part to move on. We have seen instances in the past stretch on too long it just causes disharmony and there is no outcome to it. It s time we focus on the remainder of the series. There s a lot of cricket to be played and it should not happen in bad taste, Kohli sportingly said ahead of the third Test.

The quote suggests both teams have moved on. It is a thing of the past. The water is under the bridge. But that does not mean that they will stop going at each others throat.

Everyone said that we are going to lose 4-0. It s 1-1. We re one win away from regaining the trophy and that s what we are here to do, said Lyon, who took a career-best 8 for 50 in Bengaluru. The pressure is right on India; there is no pressure on us, added Nathan Lyon to the fire.

On the other hand, VVS Laxman CricketCountry s Chief Cricket Mentor and whose flick of the wrist was analogised with plucking of a flower by Harsha Bhogle believes otherwise: If I was an Australian, I would be wary of a backlash, maybe in Ranchi, maybe in Dharamsala, maybe in both places.

Ishant Sharma and Umesh Yadav beat the edges more than Josh Hazlewood did, but the Indian duo did not pick up as many wickets. Nathan Lyon and Steve O Keefe dismantled India, but they did not perform well under pressure like Ravichandran Ashwin and Ravindra Jadeja. 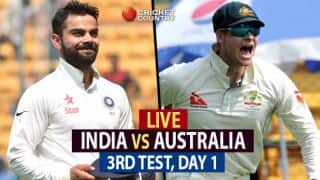