Steven Smith remained unbeaten on 178 as Ravindra Jadeja s 5-for helped India restrict Australia under 500 in their first innings of the third Test.

Steven Smith remained unbeaten on 178 as Ravindra Jadeja s 5-for helped India restrict Australia under 500 in their first innings of the third Test, at the Jharkhand State Cricket Association (JSCA) International Stadium in Ranchi. Resuming at 299 for 4 on Day Two morning, Australian batsmen continued to make most of excellent batting conditions early on in this contest, adding another 151 runs for the remaining 6 wickets. Jadeja claimed 5 for 124, and played a massive role in restricting Australia to 451. Earlier in the day, Glenn Maxwell slammed his maiden Test century to bolster his side s chances of getting a formidable total. FULL CRICKET SCORECARD: India vs Australia, 3rd Test, Ranchi

Smith continued to prove why he remains the best Test batsmen among all his peers, facing as many as 361 balls and reaching 178 not out. This was Smith s 19th Test century, and his 11th since becoming Australia s Test captain. Smith was also able to enter record books, as his individual total of 178 not out is now the highest-ever by an Australian captain in India. He added 191 runs with Maxwell for the fifth wicket, which also happens to be the best partnership for the fifth wicket for Australia against India. FULL CRICKET BLOG & UPDATES: India vs Australia 3rd Test at Ranchi

Australia had reached 299 for 4 on Day One, and hoped to garner as many runs as possible before the wicket started showing the dangerous signs. For that matter, there were plenty of occasions when spinners got sharp turn as well as bounce, which would certainly keep the visitors hoping of an encore of their performances with the ball.

Virat Kohli continued to remain off the field throughout Australia s innings on Day Two, after suffering a nasty blow to his right shoulder while fielding on the opening day. Kohli did warm up with the Indian team before the start of play, but did not change to the match jersey and remained within the confines of the dressing room.

Maxwell’s 104 will encourage the Australians. He faced 185, striking 9 boundaries and 2 sixes. He fell to Jadeja, who struck later in the morning session twice in an over to get rid of Matthew Wade and Pat Cummins. While Wade fell for a brisk 50-ball 37, Cummins was cleaned up on a delivery which turned away from him sharply after pitching on middle-stump line, knocking the off on its way.

Smith added 51 more runs with Steve O’Keefe, who scored a 75-ball 25 with 5 boundaries. Jadeja, who remained in the bowling attack post lunch, first got Nathan Lyon caught at silly point and then ran Josh Hazlewood out to keep Australia to 451. 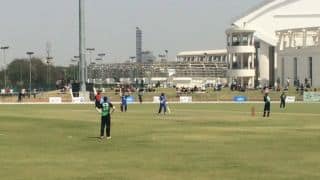 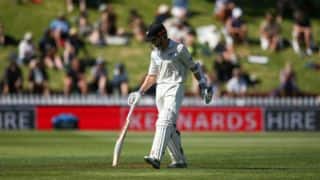