Smith had faced the media for the first time since his tearful apology following the sandpaper/ball-tampering scandal, recently.

Australian coach Justin Langer equated Steve Smith as the Virat Kohli of the Australian cricket team ahead of the 3rd Test between India and Australia – the Boxing Day Test – starting December 26.

Smith had faced the media for the first time since his tearful apology following the sandpaper/ball-tampering scandal, recently, stating that he is itching for return after the ban.

Langer revealed that he has spoken Smith and feels he is in a very determined place.

“I’ve spoken to him. That’s much more important to me than what I read in the press – that’s with absolute respect – because I hear it straight from the horse’s mouth,” Langer said.

“I think he’s in a very determined place. Obviously, it’s been a really tough time for him. But we can’t wait to see – can’t wait to have him back. [I am] really looking forward to this – he’s [the] Virat Kohli of the Australian cricket team. That’s the truth of it. He’s an outstanding player, he’s been our captain. He’s a fantastic young bloke. “I know how determined he is to get back and play for Australia. That makes me feel warm and fuzzy, knowing Steve Smith is determined.”

Langer also spoke the team combination for the 3rd Test and hinted allrounder Mitchell Marsh may get the nod at the MCG ahead of Peter Handscomb, as the MCG track may require an extra bowling resource.

“In a perfectly balanced side, you’ve got someone who can bowl some overs,” the coach said. “And Mitch becomes an attractive commodity on a wicket (that) unlike Adelaide and Perth … although there’s a bit of moisture in it, we also know the history of it.

“Our fast bowlers have been lucky, we’ve bowled less overs than India’s bowlers at the moment, particularly (Jasprit) Bumrah, and that’s an important part of the series.  The more we can look after the guys, the better,” he added. 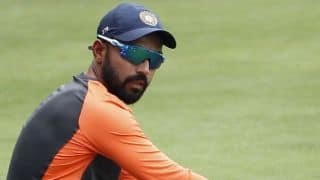 Year-ender 2018: Zimbabwe review – A rare away Test win the only saving grace