Steven Smith, resuming at 117 not out, registered the highest score by an Australian captain in India to hold one end, while Jadeja kept making further inroads for India from the other.

Ravindra Jadeja claimed three wickets in the first session to peg Australia back, but could not prevent the visitors from notching up the first 400-plus total in the ongoing Test series against India. On Day Two of the second Test, Steven Smith registered the highest score by an Australian captain in India to hold one end, while Jadeja kept making further inroads from the other. For inexplicable reasons, India kept their best bowler Ravichandran Ashwin out of the attack for the majority of the first session, but Jadeja made up for it somewhat by bowling a terrific spell once again. The highlight, however, was Glenn Maxwell bringing up his maiden Test century on his comeback and becoming only the second Australian after Shane Watson to have tons across formats. FULL CRICKET SCORECARD: India vs Australia, 3rd Test, Ranchi

At lunch, Smith was unbeaten on 153 whereas Matthew Wade stroked his way to 37 off 50 balls before falling to Jadeja. It was in the 116th over when India finally had something to smile about, with Jadeja removing Wade and Pat Cummins in a space of 3 deliveries. However, Smith continued to bat with similar doggedness and flair which was witnessed on Day One, and in the process went past Michael Clarke s score of 130 the previous best by an Australian captain in India in the first hour s play.

The Australians have dominated India since the second session on the opening day, and there were no surprises when the tone was set early on with both Maxwell and Smith getting their first runs in boundaries. In fact, the first scoring shot of the day was a Maxwell-boundary off Umesh Yadav which took Australia past the 300-run mark.

The second day morning was replete with action, starting with a Umesh Yadav snorter breaking Maxwell s bat into two parts. However, undeterred with the blow, Maxwell got into his 90s and that was when his true nature of being fidgety came to the fore. He looked like having lost both patience and discipline when he moved closer to his century, playing a few unwanted strokes in the air and eyeing the gap in the thirdman region. Luckily for the right-hander, a stroke in the air went past the gully and got him his maiden century, which was followed by an emotional celebration.

The Virat Kohli-less India continued to lack both intensity and intent, and the session was also marred by a couple of poor effort in the field. An embarrassing mix-up between Umesh and Cheteshwar Pujara saw the ball racing to the boundary off Smith s bat.

On another occasion, a run-out chance was missed when an inattentive Ishant did not get into position in time to collect a throw from Ashwin in the deep and run out Maxwell when he had just crossed his 100.

Jadeja continued to be the rockstar for India. He began with an unplayable spell with also helped him snaffle the key wicket of Maxwell. The first four overs from Jadeja were maidens, including a wicket. He kept India’s hopes alive of not letting Australia getting far too many runs on the wicket which has remained a batting paradise, extracting sharp turn as well as bounce to keep the batsmen on their toes.

India had their chances but luck did not favour them. A delivery from Ishant took an edge off Smith’s bat but bounced right in front of Saha, who had done everything in his capacity to lunge forward and collect it.

Going into the second session, Australia will hope to collect as many runs as they can with not much batting left in their ranks. The pitch has started assisting in sharp turn, even though the bounce remains even, at the Jharkhand State Cricket Association (JSCA) Ground’s wicket.

The turn will put some more pressure on India when they come out to bat, especially with there being no clarity whatsoever on the status of their captain. Kohli did warm-up before the day’s play, but has remained fixated in the dressing room donning the training kit. He is expected to walk out in the middle in the second session and bat at No.4. 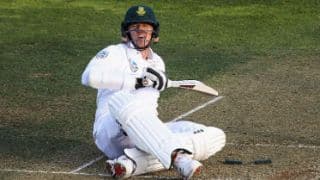 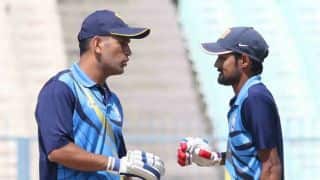