Pujara, who scored 521 runs at an average of 74 with the help of three hundreds, was named Player of the Series in the historic series win

India‘s top run accumulator Cheteshwar Pujara Monday described the current team which clinched the country’s maiden Test series win in Australia as the best he has been a part of with lethal bowling attack complementing the batting. (ALSO READ: Top performers of Border-Gavaskar Trophy)

Pujara, who scored 521 runs at an average of 74 with the help of three hundreds, was named Player of the Series in the historic series win. (ALSO READ: Best Indian team I ve been part of says Man of the Series Cheteshwar Pujara)

“It’s a great feeling for all of us. We’ve been working hard to win a series overseas, and winning in Australia has never been easy. This is the best Indian side I have been part of. I would like to congratulate the team,” he said after India clinched the four-match series 2-1. (ALSO READ: India win first Test series in Australia following SCG wash-out)

The 30-year-old Pujara was all praise for the bowling attack.

“We’ve had four bowlers, and it’s not easy taking 20 wickets, so credit goes to all our fast bowlers and spinners…It is remarkable,” he said. (ALSO READ: Five statements that backfired)

Asked about his tremendous form in the Test series, Pujara said, “I am really pleased with my contribution. As a batsman, I was just getting used to the pace and bounce.

“Apart from that, playing in South Africa and England has helped me improve my technique. For me, it’s all about preparation and I was very well prepared.”

He said his first hundred of the series in Adelaide was special.

“Scoring a ton at Adelaide and going 1-0 up is what we were aiming for.”

On his future plans, he said, “I’ll be playing some first-class cricket back home, and I’ll play some county cricket during the IPL.

“The next Test series is some 6-7 months away, it’ll give me some time to prepare. I would like to play white-ball cricket, but Test cricket is my priority, and it always be so.”

Australian captain Tim Paine admitted his side were outplayed by a superior team and India deserved to win the series.

“Have to tip our hat to India, we know how tough it is to win in India so congrats to Virat and Ravi because it’s a huge achievement. They deserve to win the series.

“We are disappointed, definitely over the last two Tests. We had our chances in Adelaide, in Perth I thought we played some good cricket, but in Melbourne and Sydney, we’ve been outplayed,” the home team captain said.

He said there were some positives for his side from the series.

“There’s some talent in this team, and it was good for our top six to play against potentially the world’s best bowling line-up. We have Tests against Sri Lanka and then the Ashes, so this series was important.

“The message to everyone in domestic cricket is to keep scoring runs. We know there are guys outside of this group who want to come in. No illusions, we need to keep working hard. Cricket’s a funny game and it can turn very quickly. We’ll have an eye on for the series against Sri Lanka.” 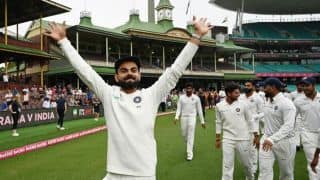 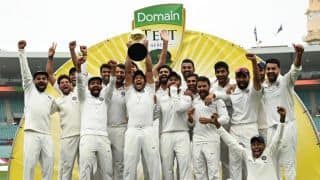