India wrestled their way back into the driver’s seat on Day Three of the fourth Test match against Australia as the visitors were reduced to 89 for five at lunch. India wrestled their way back into the driver’s seat on Day Three of the fourth Test match against Australia as the visitors were reduced to 89 for five at lunch.

Australia had earlier bowled out India for 272 in their first innings, with the hosts holding a slender lead of 10 runs. From the looks of how the pitch is behaving, even a 150-run target would be difficult to chase batting fourth, so the Australians would have been really pleased with their efforts.

Resuming their first innings on 266 for eight at the start of play, Australia required only 13 deliveries to take the two remaining Indian wickets. Nathan Lyon added two more to his tally of five on Day Two, thereby recording a career-best bowling analysis of seven for 94.

However, whatever little satisfaction or confidence the visitors would have gained was whisked away from them straight away by India’s three-headed spin demon. Australia threw a rabbit out of the hat by sending Glenn Maxwell to open the batting in the second innings with David Warner.

In the end, the experiment did not yield the expected results as Ravindra Jadeja bowled through the defence of the right-hander in the fifth over of the innings. MS Dhoni then resorted to spin from both ends after bowling Bhuvneshwar Kumar for just two overs.

David Warner (8) was to follow his opening partner back to the dressing room soon after, as Jadeja carried on his terrific form with the ball. The left-arm spinner trapped the left-handed Warner leg-before bowling over the wicket as Australian captain Shane Watson walked out.

Ravichandran Ashwin then got into the mix by dismissing Phil Hughes (6) leg-before. Ashwin’s ball from around the stump to the left-hander pitched on middle in the rough and spitted out with a vicious turn, striking Hughes’s back pad. It was a 50-50 call as to whether the ball would have taken off-stump and the umpire decided to side with the ball.

Within no time, Australia were five down, and they didn’t even have a lead of 50.  Pragyan Ojha came in and dismissed Watson for just five runs. The chinaman was a bit lucky with his ball keeping low after bouncing on middle, as Watson tried to pull it over mid-wicket. However, Watson could only find the bottom edge as the ball struck the middle stump. Jadeja then claimed his third wicket as he trapped Ed Cowan (24) plumb in front. 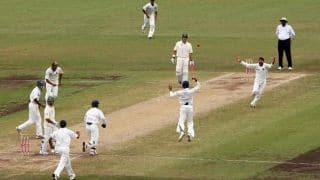 10 bowlers and their bunnies in Test cricket