India lost two wickets and could have lost one more, if the umpire had obliged, as they took tea on Day Two of the fourth Test against Australia at 135 for two. India still trail Australia by 127 runs. 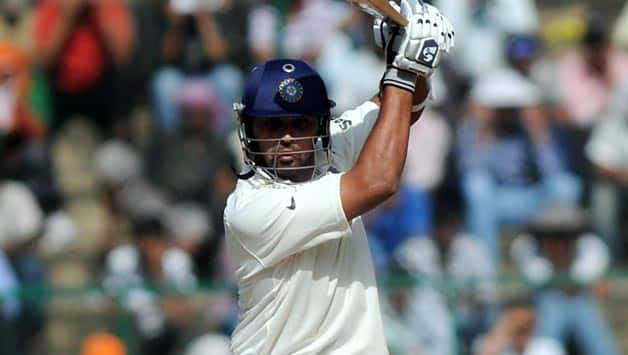 India lost two wickets and could have lost one more, if the umpire had obliged, as they took tea on Day Two of the fourth Test against Australia at 135 for two. India still trail Australia by 127 runs.

The Australian bowlers maintained the pressure on the Indian batsmen throughout the two hours of the second session. The Indians were living dangerously, especially Sachin Tendulkar who survived a few close shaves, including a plumb leg-before shout against Nathan Lyon.

The off-spinner took both wickets to fall in the session after coming in to bowl in the 20th over. The three Aussie quicks — Mitchell Johnson, James Pattinson and Peter Siddle — shared the first 19 overs of India’s first innings with probing fast bowling. The trio tried everything — from finding the edges, to rapping Cheteshwar Pujara on his fingers and also a bit of sledging. But they were unable to dislodge Murali Vijay and Cheteshwar Pujara in the first hour of the session.

However, Lyon came in and castled Pujara (52) in his fourth over with a delivery that refused to turn enough. Pujara played for sufficient turn, but the ball whisked past the edge of his blade and took the woodwork. It was a much-needed breakthrough for the tourists after Pujara reached his second half-century in Tests.

Virat Kohli (1), up two positions from his usual No 5, did not last long after Pujara’s dismissal. Lyon was the wicket-taker again as he trapped the Indian youngster in front bowling around the wicket. Sachin Tendulkar was in next, among huge cheers from the Saturday crowd.

However, the Australians, Lyon in particular, did not let the master batsman settle. Lyon kept up the pressure and almost had Tendulkar trapped leg-before to what looked like a straightforward decision. But umpire Richard Kettleborough denied the tourists the prized wicket. It was not the only close call for the little master as he found it difficult to negotiate Lyon and gave the Australian plenty of opportunities to appeal.

Meanwhile, India’s run-rate dropped to below four runs an over, from what was at one point above six. Vijay, who had looked fluent with his strokeplay and was timing the ball nicely in Pujara’s company, shifted down a gear. In the end, the two batsmen managed to reach the tea break unscathed as the Australians set up what promises to be a gripping third session of play.