Australia fought their way back into the fourth Test against India after being bowled out for 262 on Day Two. An inspired bowling performance, spearheaded by off-spinner Nathan Lyon, reduced the hosts to 266 for eight at stumps. India have a lead of just four runs. 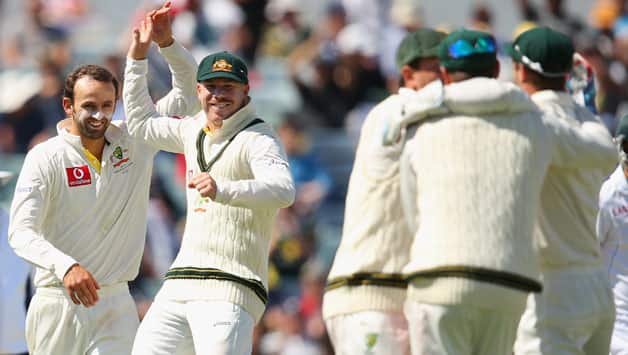 Australia fought their way back into the fourth Test against India after being bowled out for 262 on Day Two. An inspired bowling performance, spearheaded by off-spinner Nathan Lyon and a mid-innings sledge-athon, reduced the hosts to 266 for eight at stumps. India have a lead of just four runs going into the third day.

Lyon made exceptional use of the snake pit of a pitch to fox the Indian batsmen. The 25-year-old took two wickets, Cheteshwar Pujara (52) and Virat Kohli (1), in the second session after coming on in the 20th over of India’s innings. He went on to take three more, including the prize scalp of Sachin Tendulkar, in the final two-and-a-half hours.

Peter Siddle got the wicket of a well-set Murali Vijay (57) soon after tea. The Australian quick’s bouncer hit Vijay on the gloves as the batsman tried to fend it and the ball looped straight up in the air. Matthew Wade took an easy catch as Vijay was gone for 57 after tallying 1000 runs in Test cricket.

Lyon then dismissed debutant Ajinkya Rahane (7) as India lost their fourth wicket and second of the post-tea session. The off-spinner, bowling around the wicket, got Rahane caught at backward short-leg after the Mumbai lad looked to take his bat out of the way to a rising delivery. The ball clipped the gloves and Steven Smith readily obliged.

Then, came the big one. Sachin Tendulkar (32) had survived a few close shaves after coming in at 114 for two. Lyon had unsuccessfully appealed for a leg-before when Tendulkar was on one, but was to be denied by the umpire. Replays showed that Tendulkar had been very lucky. The little master, playing his 198th Test, hit 31 more before eventually being successfully trapped in front by Lyon.

At 180 for five, Australia knew they were in with a chance of getting a lead, which would be vital on this pitch. A heated 30 minutes ensued as Indian skipper MS Dhoni was caught running in the middle of the track. The Australians made their feelings clear, especially the usually chirpy David Warner, who gave an earful to the batsmen. Eventually, the two umpires had to intervene to arrest the sledge-fest.

It was for the first time in this series that the trademark Australian aggression had come to the forefront in this series, which was good to see. Dhoni then threw his wicket away just as the partnership between him and Ravindra Jadeja was beginning to settle in. Dhoni tried to chip-pull James Pattinson over mid-wicket, but found his Australian counterpart, Shane Watson, who plucked an easy catch. At 210 for six, Australia were on top at Delhi.

Jadeja and Ravichandran Ashwin denied the visitors from digging into the tail and put on a very handy 44-run seventh-wicket partnership. Jadeja seemed to have grown in confidence after aiding India to a nail-biting win in the third Test. The left-hander looked extremely confident and assured at the crease under pressure. He hit six boundaries in his 43 and got able support from Ashwin, before falling to Glenn Maxwell towards the fag end of the day.

Maxwell had got a bowl for the first time in the 63rd over of India’s innings and responded immediately, even as the Australians fell way behind in their over rate. The tourists had bowled 12 overs an hour throughout the day, compared to India’s 15, and play had to be extended by half-an-hour.

However, Australia made good use of their extra 30 minutes as Lyon sent Ashwin packing to record a memorable five-wicket haul. India took stumps at 266 for eight and would look to get a lead of at least 50 on Day Three, since they would be batting last on this surface.