Having pulled back things in control after losing the toss and witnessing Australia add as many as 131 runs in the first session, India would be more than pleased to restrict the visitors to 300 in their first innings.

Steven Smith s century and Matthew Wade s gritty innings of 57 pushed Australia to a first-innings total of 300 on the opening day of the fourth and final Test. The final match, being played at the picturesque Dharamsala cricket stadium, witnessed both the teams battling hard for honours on the first day, with Smith and Wade shining with the bat for Australia, but Kuldeep Yadav hogging all the limelight at the end of the day. Australia were bowled out for a mere 300 on an excellent batting wicket, and India will want to produce a repeat of their first-innings show from the Ranchi Test. FULL CRICKET SCORECARD: India vs Australia, 4th Test at Dharamsala

In the previous Test, India had fought back remarkably well with the bat to put up 603 for 9 declared, thus setting Australia the final day to bat out and force a draw. While the visiting side did manage to achieve a draw, India will not mind putting Australia in a similar situation once again. India, who lost the toss on Saturday, will be batting in the fourth innings and the pitch at the Himachal Pradesh Cricket Association (HPCA) Ground in Dharamsala is expected to crumble. In fact, there already has been enough turn as well as variation off the pitch which would keep the bowlers interested. Full Cricket Updates, India vs Australia 2017, 4th Test at Dharamsala, Day 1

For India to avoid batting in the fourth innings and presumably chase a total, a strong batting performance is needed. While the hosts batsmen will be expected to continue from where they left at Ranchi, to make a repeat of such a monumental effort will not be easy. Also, the fact that India have gone into this Test with five specialist bowlers means they also are one batsman short, and are without Virat Kohli.

India made two changes for the Dharamsala Test with one being a forced alteration. Kohli, who was not 100 per cent fit, sat out and made way for Kuldeep. India also pulled out their most senior cricketer Ishant Sharma from the equation, bringing in Bhuvneshwar Kumar hoping that he would be able to exploit the bowling conditions grass on the pitch and breeze with the new ball.

Bhuvneshwar, in fact, did provide India an early opportunity when he induced an edge off David Warner s bat in the first ball itself. But a poor effort in the third slip from Karun Nair saw the Australian opener getting a lifeline. Warner made most of the chance, stroking his way to the first fifty of the tour.

Kuldeep has raised the hopes for the bowlers to have a bigger role to play in the final Test. He bowled with a lot of guile to snaffle 4 for 68 on his Test debut, accounting for batsmen such as David Warner (56), Peter Handscomb (8), Glenn Maxwell (8) and Pat Cummins. Kuldeep certainly deserved a five-for on Test debut. Kuldeep became the 288th Test cricketer for India and the first chinaman bowler for the team currently ranked world No. 1 in this format.

On their part, Australia may feel they squandered an opportunity to get a strong total on the board. After a rollicking start in the first session wherein Australia finished at 131 for 1, the visitors stumbled to reach 178 for 5. Matt Renshaw, Peter Handscomb, Shaun Marsh and Glenn Maxwell were dismissed for single-digit scores, which hampered Australia s chances of getting a big first-innings total.

With 300 runs in their kitty, Australia will want to make most of the new ball which swung prodigiously during the start of the Test. There is a lot on offer for the spinners as well, with Ravichandran Ashwin getting sharp turn with the old ball as the game progressed. A flurry of wickets is what Australia need on the second day morning, and every partnership will scare them since they are just coming off a rigorous Ranchi Test. 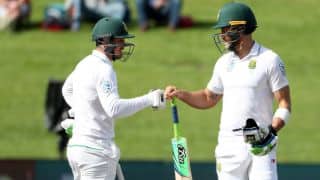