A fabulous half-century from Ravindra Jadeja and his 96 run stand for the seventh wicket put India ahead of Australia.

A fabulous half-century from Ravindra Jadeja and his 96 run stand for the seventh wicket put India ahead of Australia, on the third day morning of the series-decider, being played at Dharamsala. However, after being dominated for the majority of the morning session, Australia fought back to take four quick wickets in the last 40 minutes to apply brakes on India s charge. At lunch, India were bowled out for 332 in a slightly extended session, with a slender lead of 32 runs. Jadeja fell for a fine 63 and Saha followed him back in the hut after being surprised by a snorter from Pat Cummins. Bhuvneshwar Kumar fell for a duck with Steve O Keefe taking his first wicket in the innings. FULL CRICKET SCORECARD: India vs Australia, 4th Test at Dharamsala

For the first time in the contest, a wicket-less session appeared to be ensuing after Jadeja survived a caught-behind decision off Pat Cummins on the very first ball of the day. Jadeja used the DRS immediately and went on to hurt Australia in the overs that followed. He began the day with a splendid straight drive for a four off Cummins to bring down Australia s lead under 50, and kept playing his strokes all the way to yet another half-century. In the ongoing season, Jadeja has scored more than 550 runs at a mighty impressive average of over 42 and has taken 68 wickets. Full Cricket Updates, India vs Australia 2017, 4th Test at Dharamsala, Day 2

Jadeja remained in the spotlight as more than Saha, it was he who was required to change batting gears and ensure that India do not keep slipping into trouble in the Test. Jadeja responded superbly, bringing out all his skills in defence as well as the insistence on rotating the strike. However, after what turned out to be a really special innings from him, Jadeja got slightly flustered after an extended war of words with Matthew Wade and a flurry of short balls from Cummins, and fell for a 95-ball 63.

Jadeja’s innings was also lit up with the four sixes that he hit, two of which came on the second day evening. He looked for runs on an aggressive note, but surprisingly, Saha’s approach was a little subdued. India had some more batting left in their ranks even when Jadeja was dismissed, but Australia kept making further inroads and did not allow India more than a 32-run lead. Cummins brought them back in contention removing both Jadeja and Saha, whereas O’Keefe accounted for Bhuvneshwar Kumar.

Steven Smith’s contribution in the field with two terrific catches helped his side made a comeback. While he took a clean, low catch at first slip to get rid of Bhuvneshwar, he had to leap taking a few paces behind and pulling off a one-handed catch to remove Saha from the equation.

Kuldeep Yadav brought out a sweep shot for his first international boundary, which showed he had a few runs in him. However, Nathan Lyon returned to have him caught at deep fine leg, taking his fifth five-wicket haul against India out of nine in his career so far.

Lyon is now only one wicket behind Richie Benaud in the list of most wicket-takers for Australia in Test cricket. In 67 Tests, Lyon has 247 wickets. He now has 64 wickets in 14 Tests for India. On their part, Australia’s fast bowling pair of Cummins and Hazlewood also did a fine job with a three-over old ball, keeping it tight against the Indians. 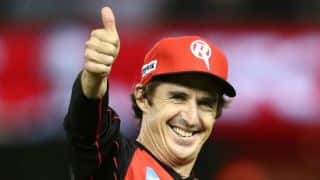