KL Rahul's pull shot off Cummins became a subject of criticism as he was batting on 60 and set for a big score on Day 2 of the 4th Test between India and Australia.

Dharamsala: Calling his execution of a pull shot “horrible”, India opener Lokesh Rahul termed the morning spell bowled by Josh Hazlewood and Pat Cummins as the “toughest” he has faced in his nascent Test career. “Josh (Hazlewood) and Cummins in the first session, I can say, is the toughest (spell of fast bowling) I have faced in Test cricket so far. They put the ball in the right areas and they swung the ball bowled with lot of pace and venom,” Rahul was all praise for the rival speed merchants. Rahul’s pull shot off Cummins became a subject of criticism as he was batting on 60 and set for a big score. FULL CRICKET SCORECARD: India vs Australia, 4th Test at Dharamsala

“It was horrible execution for sure. But having batted out there in the middle for a long time, I thought I could have taken him (Cummins) on, as there were no fielders at the back.

Like I said horrible execution but the intent was right. “I can always sit here and question intent and hundred other things. But then in the middle, I thought I could take him on but unfortunate it didn t go my way. “Hopefully, in the second innings, I can get him away. So I will go out with a positive intent in second innings again,” Rahul said in his defence.

With five half-centuries in the Test series, Rahul is among the two consistent batsmen from home team, other being Cheteshwar Pujara. The starts have not been converted but he is not losing his sleep over it. “Quite honestly, I am not regretting anything. Obviously, a little disappointed that I have not been able to convert the starts and get big runs for the team. As an opener, my responsibility is to spend as much time in the middle to get big scores in the first innings so that we don t have to bat in the second innings. “On a personal front, it hasn t been the worst series for me. I got starts, batted really well. Aussie bowlers haven t made it easy. They have challenged us in all the games. Thoroughly enjoyed batting and hopefully one good knock in the second innings might be the time. Might be the knock, I have been waiting for the whole series.”

Rahul rated the wicket as “fantastic” and said score of 248 for 6 at stumps was good on such a track. “Yes it is. By far the best wicket we have played on. There s been something in it for the spinners and something in it for fast bowlers as well. The ball kept swinging the whole day. If you spend some time out there in the middle, it s really good to bat. Yeah, all of us got starts but we couldn t convert,” he added. Strategy was to stop Ajinkya Rahane from playing sweep, reveals Nathan Lyon

“It was good facing Josh and Cummins when they were bowling with a lot of heart. Cummins has been the guy, who has, as a fast bowler, challenged us in this series.” Rahul has played bulk of his Test cricket under Virat Kohli s captaincy and feels that not having a quality batsman like Kohli in the decider is a factor.

“We are missing Virat Kohli. Somebody like him, we have all played under him and he has been a huge influence on everybody in the team. He always sets great examples for us and he leads from the front. His aggression and energy are obviously something that would have been really good for us.

“We need to learn to put our hands up and take the pressure and the responsibility sometimes. This game is a good opportunity for the rest of the guys to stand up and be counted,” the Karnataka lad said.

Rahul observed that the cracks on the pitch will play a role in the next 2-3 days.

“I think the ball will do things off the crack. Even when we bowled on the first day, a few balls did do something funny off the cracks.” 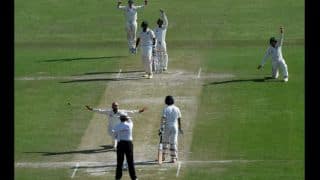