India looked to hand Australia a similar treatment which they dished out in Ranchi, as they batted to grind down the visiting side in the first session on Day Two at Dharamsala.

India looked to hand Australia a similar treatment which they dished out in Ranchi, as they batted to grind down the visiting side in the first session on Day Two at Dharamsala. On a conducive wicket where the ball neither moved in the air or off the pitch, nor even turned dangerously, India crawled to 64 for 1. The hosts lost Murali Vijay for 11 in the morning session, whereas KL Rahul survived a dropped chance to reach not out. At the other end, India s hero from the previous Test, Cheteshwar Pujara (22 not out) provided all sorts of ominous signs to Australia that another big knock could be in the making. FULL CRICKET SCORECARD: India vs Australia, 4th Test at Dharamsala

India s approach of slow and steady scoring, keeping in mind the importance of grinding down a bowling attack which had sent down as many as 210 overs in their previous outing, does not look wrong at all. The pitch remains excellent for the batsmen and it is important for India to get a big score in the first innings, and try and rule out the possibility of batting fourth in the deciding Test being played at the HPCA Ground. The pitch carries a lot of promise for the spinners, which was already proven by Kuldeep Yadav when he snaffled 4 for 68 to wreck Australia s innings on the opening day. Full Cricket Updates, India vs Australia 2017, 4th Test at Dharamsala, Day 2

The scoring rate remained well under 3 per over with Rahul curbing his attacking instincts and Pujara setting up himself for another big innings. It must be remembered that Rahul and Pujara have been India s best batsmen in this series, and the longer they stay at the crease the stronger their position could get.

Vijay rode his luck for a while before he fell to Josh Hazlewood. Early on in the day, Vijay could not control a stroke and the ball flew in the air straight towards David Warner at mid off. Luckily for the batsman, the ball dropped short of the fielder.

Vijay was tested amply by Hazlewood who bowled a lot of deliveries outside off pitching it in the same area on the wicket and getting similar bounce. On one occasion, the ball nipped back in slightly and took an outside edge, which once again fell way short of the wicketkeeper.

Before that, Hazlewood had produced a peach of a delivery in the line of the off-stump, angled into the batsman. The ball hit one of the minor cracks right in front of off, and changed its course beating the bat as well as the off-stump. It was perhaps the best ball of the session. Vijay and Hazlewood were involved in a light banter which was certainly a good sight after all the action that has taken place in the series so far. But the bowler eventually had the last laugh, getting Vijay to poke on a delivery outside off which could have been left alone.

Rahul, who dropped the anchor to reach 31 not out off 75 balls, was lucky when Matt Renshaw failed to grab a regulation catch at first slip off Pat Cummins. The ball flew over the first slip fielder s hands as he crouched to grab it but failed.

At lunch, India trailed Australia by another 236 runs in the first innings. 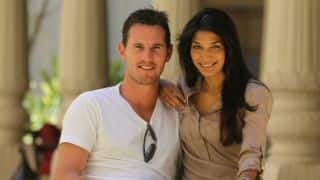 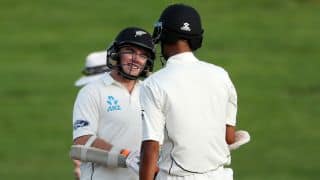