Dharamsala, all set to become India s 27th Test venue, is somewhat curious as the choice for a Test ground given that Himachal Pradesh is one of five (excluding Chhattisgarh) Indian states to have never produced a Test cricketer.

Forty-six runs in 3 Tests but fans and are still keeping their fingers crossed over Virat Kohli’s fitness. The Indian captain suffered a nasty blow to his right shoulder and there is a high chance of Ajinkya Rahane leading the side. Mumbai batsman Shreyas Iyer is a back-up. The setting now shifts to the picturesque Dharamsala for the ultimate clash but the spotlight continues to be on Kohli. On the field or off it, Kohli vs Australia has refused to die down. Australia need a win or draw in the fourth Test to retain the Border-Gavaskar Trophy, while for India only a win can get them lay their hands on the coveted silverware. FULL CRICKET SCORECARD: India vs Australia, 4th Test at Dharamsala

Despite his ordinary form, Kohli s is the wicket Australia would want to get the most. The question, however, is all about how the wounded Kohli and India respond in the fourth Test against Australia in what will be the end of a marathon home season of Test cricket. Dharamsala, all set to become India s 27th Test venue, is somewhat curious as the choice for a Test ground given that Himachal Pradesh is one of five (excluding Chhattisgarh) Indian states to have never produced a Test cricketer.

But enough about Kohli: let us move on to his teammates now. Cheteshwar Pujara has crossed fifty twice in 5 outings, but those two innings were 92 and 202. Despite not getting a single hundred, KL Rahul has managed 4 fifties in 5 innings. And before having that near-unpardonable brain-fade (the trendiest phrase in cricket writing today), Murali Vijay looked perfectly in control. Ajinkya Rahane has thrown his starts away, reaching double-figures every time but falling between 13 and 18 four times. Karun Nair showed glimpses of his talent in the first innings at Bengaluru, but that has been about it: the Australian fast bowlers have found their way through his gate in consecutive innings, and will certainly be keen to exploit it again. India may want to include Iyer, who had smashed a 210-ball 202 in the tour match against the Australians. READ: Will play only If I clear fitness test , says Virat Kohli

India s lower-order (Ravichandran Ashwin, Wriddhiman Saha, and Ravindra Jadeja in this series) has delivered well throughout the season but did not quite come over here. There was some redemption in the flat surface of Ranchi, but that had come after four lower-order collapses: 7 for 11 and 7 for 30 at Pune, and 6 for 33 and 6 for 36 at Bengaluru. No, there is no reason to be complacent after one successful innings at Ranchi.

Though David Warner is not in form, he has always looked one innings away from form. He has come out with a plan, that of unsettling the opposition before they could settle down. Just like Rahane, Warner has made it to double-figures every time he has batted, but has not made it to forty even once.

There is no such issue with Matt Renshaw, who has put his height and long reach to great use, smothering spin and countering pace with as much ease as any touring opener this winter. He has also showed he is capable of scoring at a rapid rate if needed, and has made up for his senior partner s failures. Shaun Marsh and Peter Handscomb may not have got big scores (Marsh, for all the accolades he has received this series, has actually failed four times in six innings), but they have shown enough mettle at Ranchi to prove that it is not sufficient for India to go past the top three, as has, contrary to expectations, Glenn Maxwell; and pesky Matthew Wade is always a nuisance down the order, sweeping the spinners out of their comfort zone.

This brings us to Steven Smith, easily the batsman of the series, even on the face of severe criticism. Not only has Smith got his runs, he had made the Indian spinners uncomfortable every time he has come out to bat. Warner has tried the same, but Smith has actually pulled them off, perhaps because his approach was more controlled than Warner s. A big innings at Dharamsala will help him stake a claim in the pantheon of the legends of Australian cricket which is saying something. Steven Smith and co. meet Dalai Lama ahead of Dharamsala Test

Whose bowlers will come on top?

Pat Cummins made a more-than-impressive return to Test cricket just when it seemed that Mitchell Starc s injury had spelled doom for Australia. He bent his back to generate extra pace on a flat pitch, has bowled as fast as anyone in this series, and has produced those unplayable balls from time to time. Remember, Cummins is not even the spearhead of this fantastic attack: that role lies with Josh Hazlewood, whose numbers have mimicked Glenn McGrath s very closely throughout his not-too-brief career.

Irrespective of the pitch, the windy Dharamsala may assist swing bowling, which may make both teams consider the extra seamer. Australia may draft in Jackson Bird for one of the spinners: while Nathan Lyon is the more experienced of the two, Steven O Keefe has been more successful of the two this series. His figures of 77-17-199-3 at Ranchi may look pedestrian, but he still took more wickets and was more economical than Lyon (46-2-163-1). It will be a close call.

Similarly, India, who will have to win the Test to clinch the Border-Gavaskar Trophy (a draw will do it for Australia), will probably opt for Bhuvneshwar Kumar. Whether they will drop the extra batsman or Ishant Sharma is to be seen, but the early-morning breeze may be tailor-made for Bhuvneshwar.

Perhaps the greatest testimony to Ashwin s stature is the fact that he has been branded a failure despite taking 17 wickets at 29 from 3 Tests. Ashwin s criticism had perhaps been triggered by a superlative performance from Jadeja, who has usurped his senior partner s throne at the top spot in ICC rankings. Competitions rarely get healthier than this.

What will the pitch be like? The ball had turned and spat off the surface at Pune and Bengaluru. Ranchi, on the other hand, saw a track where five days of cricket resulted in only 25 wickets.

Given that Australia will probably hold advantage if the conditions assist new-ball bowlers, will India prepare another bone-dry surface to let Ashwin and Jadeja decide the fate of the match?

Will India get a third seamer in and sacrifice a batsman? Will they replace Ishant with Bhuvneshwar? Will Australia leave out O Keefe for Bird? Or will Lyon get the axe? Or will both spinners play?

Most importantly for both camps, fans, critics, media, and match officials will Kohli walk out to toss tomorrow?

Alas, that is something only time can tell. We can only speculate. 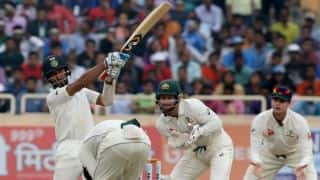 India vs Australia, 4th Test: Plenty at stake as 2 top-ranked sides face each other in series decider