Dharamsala: Terming it an “unbelievable feeling” to keep the deciding Test match open after two days, Australia off-spinner Nathan Lyon revealed how stopping Ajinkya Rahane from playing the sweep shot helped him dismiss the India captain today. It was variation in speed and coming over the wicket to stop Rahane that did the trick, according to Lyon, who ended with four wickets in the final session of the second day. “It was a bit of a tactic. If you looked at the way the Indians have been playing me, especially Ajinkya, he has been sweeping me a lot. My plan was to come over the wicket and try and get him not to sweep me so that I can I can bring my stock ball to be more effective. It worked well. I spoke to Steve Smith about that at tea and was happy with the way it came out in the end,” Lyon said explaining his strategy. FULL CRICKET SCORECARD: India vs Australia, 4th Test at Dharamsala

For Lyon, it is a big credit that Indians are under pressure going into the final three days of the series.”I reckon it is an unbelievable feeling to be pretty evenly poised after day two. I know we probably left a few run out there but to have India 240 for 6 odd after a pretty good day in the field, I am quite happy to be honest. Coming over here, everyone wrote us off and to be in this position in the last Test, one-all and pressure slightly on India is fantastic,” he said. The wicket has not changed much according to Lyon even though the bounce off the pitch has been of help.

“As the day progressed, it started to show a little bit more variations with bounce and spin, but I don’t think it has changed too much. As Australian bowlers, I was pretty proud of all of us out there. It s hard work playing cricket over here but I thought the way we went about it and bowled well in partnerships and tried to dot them up and tried to build pressure on India was fantastic.” India vs Australia 4th Test: Nathan Lyon’s 4-for pegs back hosts at stumps, Day 2

The bounce that was on offer made him feel that he is closer home. “After bowling a couple of overs before lunch, I sat down and thought about what it (pitch) is similar to and it was closer to a home wicket where I can try and generate the bounce. Bounce is my biggest weapon by virtue of which I am getting guys caught at bat-pad and slips. I went back to knowing how I bowl, which is probably the best way. Just backing my skill and enjoy the challenge of playing the best side in the world in their home conditions,” he added.

“I think he really showed he is world-class. I think Josh Hazlewood has been the same. There hasn’t been much life for the big quicks but the way Josh and Patty (Cummins) went about it has been exceptional. It shows the class of those two individuals. They work really well together and it’s great signs for Australian cricket. It s exciting to see Patty Cummins back and bowling fast.”

He feels that Indians will face a massive challenge chasing a target in the fourth innings.

“Hopefully, it’s going to be a massive challenge for them, but that really depends on how long we bat for and how many runs we can set them. But whatever we set India, that s going to have to be enough for us. We believe we re good enough. It s going to be good fun and a good challenge for us,” he signed off. 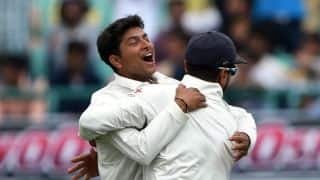