While addressing the media, Paine decided to answer a call when a journalist's phone rang.

It’s been two long days for Australia s players at the Sydney Cricket Ground but that hasn’t tired or distracted captain Tim Paine from enjoying a light moment off the field. Following stumps on the second day of the fourth Test against India that saw the visiting team amass a huge first-innings total of 622/7 decl, Paine answered a journalist s phone in the middle of a press conference.

While addressing the media as part of the routine post-day press conference, the phone, kept next to him on the table, rang. But instead of disconnecting or putting the call on silent, Paine decided to answer it and speak to the caller.

“Tim Paine speaking,” he said. “Who is it, sorry? It’s Katie in Hong Kong. Who are you after?” Paine said. “Ah Martin, he’s in the middle of a press conference at the moment. Can I get him to call you back?

“No worries, I’ll tell him to check his emails. Thanks Katie, cheers.”

Throughout the series, Paine has not shied away from having some fun. His funny banters with Murali Vijay, Rohit Sharma and Rishabh Pant have made the series more entertaining. Despite being made to toil by the India batsmen for 167.2 overs, Paine managed to keep his humor intact. 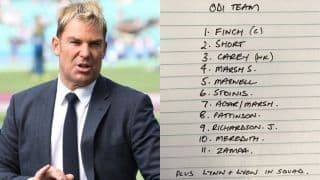