India captain Virat Kohli won the toss and elected to bat in the fourth and final Test against Australia in Sydney on Thursday.

India captain Virat Kohli won the toss and elected to bat in the fourth and final Test against Australia in Sydney on Thursday.

The visitors lead the series 2-1 after winning the opening clash in Adelaide and the third one in Melbourne. Australia claimed victory in Perth.

If India, the world’s top-ranked nation, win or draw in Sydney they will clinch a first-ever series victory in Australia.

Mayank Agarwal opens the batting with KL Rahul, with Hanuma Vihari dropping down to number six to cover for Rohit Sharma, who is unavailable after his wife gave birth.

First-choice spinner Ravichandran Ashwin was declared not fit, with wrist-spinner Kuldeep Yadav in the side to play alongside finger-spinner Ravindra Jadeja.

“It will be tougher to bat as the game goes on, so ideal for us to bat,” said Kohli. “We haven’t discussed the series win, we’re focused on this game, and this is just an opportunity to win a Test.”

Australia axed underperforming opener Aaron Finch with Usman Khawaja moved up from number three and middle-order batsman Peter Handscomb recalled to counter what is expected to be a turning Sydney Cricket Ground wicket.

In a surprise, leg-spinning all-rounder Marnus Labuschagne has been called into the side and will bat at three. Mitch Marsh was also dropped.

“We need to improve on all areas, need to do the basics better. Ball-by-ball, bit of an old-school cliche,” said Australia skipper Tim Paine. 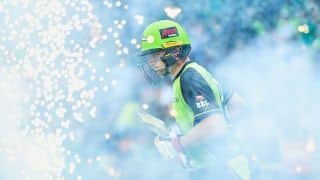