Earlier, the toss was delayed as well due to rain.

Rain once again interrupted play in the fifth One-Day International (ODI) between India and Australia at the Sydney Cricket Ground (SCG) after the toss had been delayed earlier. Ajinkya Rahane and Shikhar Dhawan were in the middle for India, having scored six runs in the first 2.4 overs. Mitchell Starc was in the middle of his second over, while Josh Hazlewood had bowled one.

India are in a must-win position, with a loss here meaning that they will not make it to the final. If the match is washed out they will get two points, which would make their equation much simpler; whoever wins the next match meets Australia in the final. 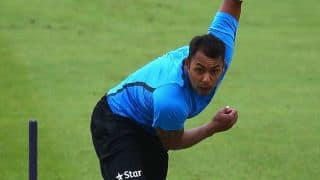 Virat Kohli should bat at No. 3, Stuart Binny should open in ICC World Cup 2015: Ian Chappell