India vs Australia, 5th ODI at Sydney: Shikhar Dhawan out for 8

India vs Australia, 5th ODI at Sydney: Shikhar Dhawan out for 8

Shikhar Dhawan fell for just eight off the bowling of Mitchell Starc.

Shikhar Dhawan fell for just eight off the bowling of Mitchell Starc in the fifth One-Day International (ODI) between India and Australia at the Sydney Cricket Ground (SCG). Dhawan guided the ball to Aaron Finch at slip to continue his poor form as Ambati Rayudu made his way in at No. 3 for India. The match was reduced to a 44-overs per side contest after rain delayed the toss and then caused an interruption less than three overs into the match.

Ajinkya Rahane and Dhawan opened the innings for India, while Mitchell Starc and Josh Hazlewood started things off for Australia. India are in a must-win position, with a loss here meaning that they will not make it to the final. If the match is washed out they will get two points, which would make their equation much simpler; whoever wins the next match meets Australia in the final. 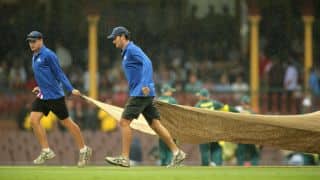 India vs Australia, 5th ODI at Sydney: Match reduced to 44-overs per side 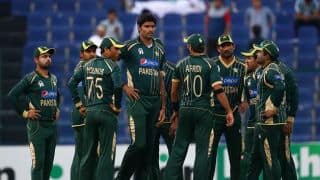 PCB put forth demands of revenue sharing ahead of Bangladesh tour