"First Test match in India, India probably didn't expect that. We have never seen him (Renshaw) play in these conditions as well." - David Warner

Bengaluru: Australia opener David Warner today praised his junior partner Matthew Renshaw for catching the Indian team off guard with his gutsy performance in the first Test despite being under the weather. The 20-year-old, on his first tour of India, had scores of 68 and 31 despite suffering from upset stomach and dizziness which required medical attention. “First Test match in India, India probably didn’t expect that. We have never seen him (Renshaw) play in these conditions as well, so we know how he can play and that’s the good thing about this game. When you have fresh people in the team, you don’t know what they are capable of as well and it adds another string to your bow,” Warner told reporters today. FULL CRICKET SCORECARD: India vs Australia, 2nd Test at Bengaluru

“He (Renshaw) played fantastic. It could have been a different story if he stayed out there or he didn’t come off (in first innings) but the way he played and the way he adapted from coming off, being sick and going back out there was credit to him.” Warner said the week-long training in Dubai before arriving in India was the best thing that could have happened to the Australian team. “Having that week in Dubai and having freshened up as well after our summer was fantastic for me and my preparation. And I know the guys that went to Dubai early, they were all talking about how good it was to prepare over there and get their mind set and get the miles in the legs to come here,” Warner said.

The dashing opener feels that staying in Dubai helped them overcome the fatigue factor. “We are truly grateful for that opportunity. Sometimes when you come here to these countries, in these conditions you probably don’t have as much preparation because as a player sometimes when you are in this heat you fatigue quite fast. And the next day, when you are not used to it, you can’t back up. So being in Dubai with the temperature at 24, 25 degrees the guys could back up day-in, day-out. We were fortunate for that and the boys are prepared and have prepared well,” he said. Vijay: IND looking to start fresh, put pressure back on AUS in 2nd Test

Warner cautioned that India will come back hard at the Australians in the remaining three matches. “They (India) are the No 1 Test team in the world. They are a great bunch of players and we know what to expect. We saw all the tricks in Pune – their bowling changes, their fielding placements, the way they play as a number one team so for us to beat them on home soil was awesome and fantastic.

“But we know they’re going to come back harder and we ve just got to adapt to the conditions again with what we face here in (Bengaluru).”

Warner admitted that Pune strip wasn’t a wicket where one can play his natural game. “Having looked at the (Pune) wicket, it was probably going to be a wicket where you couldn’t really play your shots. You were going to have to sweep off length, not just off line,” said Warner.

“So for me it was about playing with soft hands and figuring out where am I going to get the ones to rotate strike and the boundaries will hopefully come by me putting pressure on their bowlers with my defence. There’s a couple of instances where I was a little bit in my mind thinking “I can play a big shot”.”

“When we saw the opportunity to try and pounce on one or two loose balls we did that, and you saw ‘Renners’ play with Jadeja bowling into him that he took him down over long on because you saw the field was up. They are little moments we are thinking about when we re out there,” he concluded. 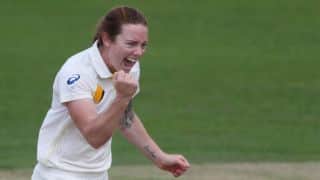