India vs Australia, 2nd Test: India assistant coach Sanjay Bangar feels that one should not read too much into Virat Kohli's failures with the bat in the opening two Tests.

Bengaluru: India assistant coach Sanjay Bangar feels that one should not read too much into Virat Kohli‘s failures with the bat in the opening two Tests against Australia as he has enjoyed an outstanding run in the home season prior to this series. “Virat’s batting has been outstanding. So we should not be commenting on one or two failures when he has been so successful. Virat’s mindset is that he will learn from failures. This is his greatness. In the coming matches, he will perform well,” said Bangar after stumps on day three of the evenly balanced second Test. Kohli was dismissed cheaply for the fourth time in as many innings after he unsuccessfully reviewed a lbw decision off Josh Hazlewood, leaving the star batsman disappointed. FULL CRICKET SCORECARD: India vs Australia, 2nd Test at Bengaluru

“We were all quite disappointed. If there was conclusive evidence it would have been better. Virat was really pumped up. He is a big match, big impact player, wanted to succeed very badly. So it was a normal sort of reaction in the dressing room when he gets out cheaply,” said Bangar. The DRS review went with the on-field umpire’s call. “This has gone to that extent, but we are new to DRS. the rules have also been tweaked a bit. So whatever it is umpire’s call becomes very crucial. We have not really sat down and evaluated but we are learning as we are playing. It is for the administrators to decide on what particular technology should be used,” he felt.

India have managed to put up a much improved batting show in the second innings and lead Australia by 126 runs going into day four with six wickets in hand. Cheteshwar Pujara and Ajinkya Rahane shared an unbeaten 93-run stand for the fifth wicket to resurrect the innings after losing the first four wickets for 120 runs. FULL CRICKET UPDATES: India vs Australia, 2nd Test at Bengaluru, Day 3

Bangar praised the batsmen, saying they were finally able to apply themselves in the centre. “We looked into the past of how we performed and what are the areas we have to adapt. After the chat we came out with solutions. The batsmen really applied themselves, used their feet quite a bit, trying to get to the pitch of the ball and also play on the backfoot. So, they put up definitely their best efforts than what they did in the previous three innings,” he said.

Bangar said the game was evenly balanced. “We fought really well over the past two days, overcoming the setback of not scoring enough runs in the first innings. Now we are back in the game and will not let the game run away from us. All in all it is a very hard fought Test match. What lies ahead could be exhilarating.”

Bangar called the surface a challenging one which will only deteriorate as the game progresses. “It has been a challenging wicket. It has been having variable bounce. The cracks are going to get wider. So, it will going to be a test for both the teams. So, as I said the game hangs very much in balance this moment. If India can put up better show with the bat for the next two sessions we are likely to have our noses ahead,” said Bangar.

Bangar also explained why Ravindra Jadeja was promoted to bat at number five. The move however did not pay off as Jadeja was dismissed cheaply. “We wanted to have a right-left combination. Jadeja has ability with the bat. We wanted to make Nathan Lyon take away his line of attack because Lyon generally comes round the wicket. He favours more more outside the off-stump to right handers. Just to upset his rhythm we sent him. And if an opportunity was there to go after O’Keefe. That was the plan, but it didn’t work out that way,” he said.

KL Rahul score his second consecutive half century of the game but was unable to convert into a big one, leaving him dejected. “Within the batting group generally we are used to fielding five batsmen. All of them have made the conscious effort to score well and look at their personal landmarks than scoring a fifty or hundred. Batsmen who want to go that extra mile and play a big innings for the day – this is something all the boys have been doing.

“Rahul was very very disappointed. We want to see him improve in the games to come because the way he was stroking the ball he looked very comfortable. He understands that in the series to come and matches to come, he definitely would want put a price on his wicket,” said Bangar. What is the ideal target on the this pitch? “You cannot put a number to the target. There are two competitive sides fighting who would like to take advantage, so we are only looking to come out and have a good morning session,” he summed up. 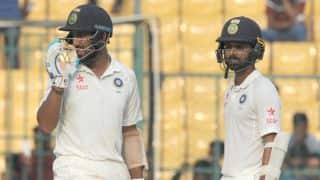