Catch the live streaming of the match here.

Australia take on India in the first warm-up tie of the ICC World Cup 2015 at the Adelaide Oval in Adelaide on Sunday. This being just a warm-up tie would act as a final build-up to the mega event, which is scheduled to get underway from February 14. LIVE BLOG: India vs Australia ICC Cricket World Cup 2015 warm-up match

For India, it will be more about getting things right on the field rather than finding a combination that could win matches for them. In the triangular series which ended last week, India experimented in almost all departments but failed to win any single match. Australia, on the other hand, may be lacking the services of their regular captain Michael Clarke but they have done exceptionally well. ICC Cricket World Cup 2015: POINTS TABLE

Live Streaming is slowly but steadily catching up in terms of both requirement and demand with fans of cricket throughout the world. Live Streaming comes in handy to cricket lovers who are unable to access television to watch the cricket match and solely depend on the internet and live streaming to watch the sports they love. ICC Cricket World Cup 2015: SCHEDULE & MATCH DETAILS 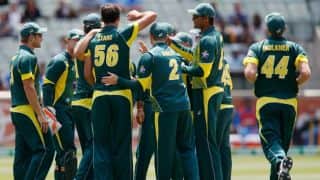