MS Dhoni, alongside Kedar Jadhav stitched an unbeaten partnership of 125 runs for the fourth wicket as India overhauled the target of 231 in 49.2 overs.

India vice-captain Rohit Sharma had raised a few eyebrows after India’s defeat in the opening match of the three-match ODI series by suggesting MS Dhoni should bat at the no. 4 spot. Last year, Virat Kohli had all but made it clear that going into the ICC World Cup in England later this year, Ambati Rayudu has been earmarked for that crucial middle-order spot.

Dhoni, who had batted at no. 5 in the first two ODIs, was bumped up a spot and batted at no. 4 in the series decider on Friday. He went on to score a second straight fifty and guided India to a series win in Melbourne – their first bilateral ODI series win Down Under.

Dhoni thus scored half-centuries in all three matches of the series and finished with 193 runs at an average of 193, remaining unbeaten on two occasions both of which resulted in Indian victories. For this, he was chosen as the player-of-the-series.

Dhoni, alongside Kedar Jadhav stitched an unbeaten partnership of 121 runs for the fourth wicket as India overhauled the target of 231 in 49.2 overs. Dhoni top-scored with 87 off 114 while Jadhav struck a brisk 57-ball 61 not out.

“It was a slow wicket, so it was difficult to hit whenever you wanted to,” Dhoni explained his knock. “[There was] No point going after the bowlers who were bowling well, so we wanted to take it deep and that was the plan. Kedar did a great job in executing [the plan].”

With his match-winning show, Dhoni has given the team management a headache as to where he should bat now no. 5 or no. 4. However, the 37-year-old isn’t worried about his batting positions saying he is ready to adapt as per the team’s demands.

“I am happy to bat at any number. The important thing is where the team needs me. I can’t say I can’t bat at No. 6 after playing 14 years,” he said. 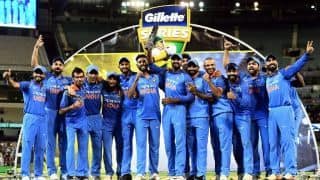 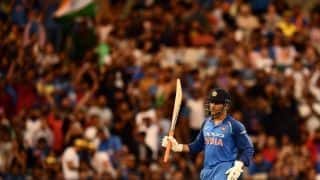