Finch pointed out that it was crucial for him to not let batting failures affect his captaincy.

That Aaron Finch is not scoring runs is surely concerning for Australia. The skipper has scored 12 runs in two matches and his slump in form is preventing Australia from getting off to a good start. In both matches, Finch was cleaned up by Bhuvneshwar Kumar to give India an early breakthrough, resulting in a cautious batting approach by Australia in the initial overs. (ALSO READ: We ran into that man MS Dhoni – Finch)

Finch pointed out that it was crucial for him to not let batting failures affect his captaincy. Under him, Australia lost the ODI series to South Africa in November last year in which Finch scored 5, 41 and 11 while the T20I series against India was shared at 1-1. He was subsequently dropped from the Test squad after getting 97 runs in three matches at 16.16.

“It s always tough when you re not getting runs personally,” Finch said. “Batting s separate to captaincy and leading out on the field. It s about everyone trying to learn together and trying to get the best out of the players on the field.

“Obviously that can be a bit easier when you re scoring runs and leading by example, but there s other times when it doesn t always work out for you, so you have to be consistent with your actions and the way that you go about it.”

Finch has been found wanting against the moving ball, something you usually don t expect from a top order batsman with 11 centuries. The 32-year-old, not holding back, took the blame behind Australia struggling in the Powerplay.

No one means to get out, Finch said. What we ve been working towards is some real solid performances through the middle overs. The Powerplays are the area we have to get right and I m responsible for that, opening the batting and being captain of the side (and) not getting enough runs of late. It s just one of those things. Once it all clicks, I think that 330 scores like that will be on the cards.”

Finch s form with the bat remains a glaring issue for most people amid preparations for the World Cup, coach Justin Langer remains confident about his captain discovering form soon. The former Australia opener pointed out that Finch will eventually balance the juggling act between captaincy and playing all three formats.

“He won t be far off. When he gets going, he scores hundreds. He s working so hard on it, he just needs a few breaks. Every now and then you need a little break, and he ll be away again.” 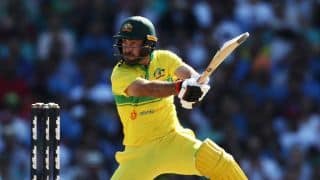