Australia skipper Steven Smith believes that dominating India’s left-arm wrist spinner Kuldeep Yadav will be crucial to his side’s chances when the two countries meet in a one-day series starting Sunday. The visitors called in local left-arm wrist spinner KK Jiyas to help prepare for Kuldeep’s guile during net practice in Chennai. Former India batsman Sridharan Sriram, a spin consultant for Australia, persuaded Indian Premier League’s (IPL) Delhi player Jiyas to get involved ahead of the five internationals. Kuldeep made an instant impression against Australia, taking four wickets in his Test debut in India’s series-clinching win in Dharamsala this year.

The 22-year-old Kuldeep will battle for a spot with left-arm spinner Axar Patel and leg-spinner Yuzvendra Chahal at the MA Chidambaram Stadium. Smith is tipping Kuldeep to play, saying his left arm talents are rare “around the world”.”They’re different so it’s good to be able to get someone who bowls a bit of that,” Smith told reporters on the eve of the game. “He is a good young talent and can be difficult to pick at times. He’s someone who you have to watch really closely. Hopefully we can put him under pressure early in his spell and try and take him for as many as we can,” Smith added.

Smith, who is coming out of a tough Test series against Bangladesh that ended 1-1, is prepared for another spin challenge on the subcontinent’s pitches. The star batsman said top-order runs would be key in what he expected would be a high-scoring affair.”Spin has always played a pretty big part in ODIs particularly in these conditions. I’d say it’ll play a reasonable part throughout this series too,” he said.

“We saw that the last time we came here in 2013 it was a run-fest where 350 was around par. If the wickets are the same, you need someone in the top four to make a really big score.” Smith, without revealing too much about his team, said that despite losing opener Aaron Finch to injury, the team would continue with Travis Head at number four. While Australia also play three T20 matches in India before moving on to the Ashes series against England, Smith said the team had the 2019 World Cup firmly in mind.

“We had a chat about it the other day. We have about 30 ODI games before the WC. For us it is about trying to find the right group of players to fill all slots,” he said.”Hopefully this group here can go a long way into filling those spots and play some really good cricket in the next five here and the one-dayers to the World Cup,” he added. 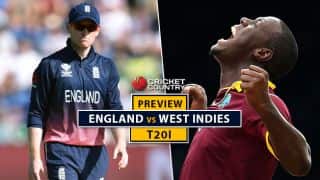