Currently, Australia are 31 for no loss in three overs against India in T20 World Cup 2016.

Australia openers took on the Indian bowlers from the very first ball, as they were off to a a real good start against India in the Super 10 Group 2, Match 31 of the ongoing ICC World T20 2016 at the Punjab Cricket Association (PCA) Stadium in Mohali on Sunday. Opener Usman Khawaja hit a boundary of the first ball of the match from Ashish Nehra, followed by four boundaries off Jasprit Bumrah, the very next over. The pitch seems to be behaving in favour of the batsman as the ball is coming onto the bat comfortably as of now. Currently, Australia are 31 for no loss in three overs, with openers Usman Khawaja and Aaron Finch on 25 and six, respectively. LIVE CRICKET SCORECARD: India vs Australia, Super 10 Group 2, Match 31 at Mohali 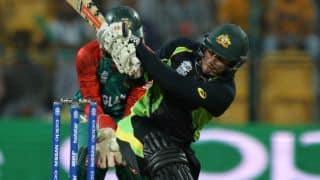