Catch Live updates of the Australia vs India match here.

(Australia clash with India in the ICC World T20 2014 at Dhaka on March 30. Catch Live Cricket Score of the match in our updates below)

Hello and welcome to the live updates of this Group 1 Super 10s clash in the ICC World T20 2014 between Australia and India at Dhaka. Prior to the start of the ICC World Twenty20 (T20) 2014, one would have felt that this contest would have been one-sided with the Australians dominating the out-of-sorts India. But, how have the tables turned? Australia need a miracle to get through to the next round as they get ready to face India, who have already qualified for the semi-finals. India have been dominant, winning their three games quite comprehensively, whereas Australia have had two close encounters but failed to cross the line by losing the plot at critical junctures. I am  Shrikant Shankar and I will be bringing you all the live updates.

Catch live scorecard and ball-by-ball commentary of the India vs Australia match here. 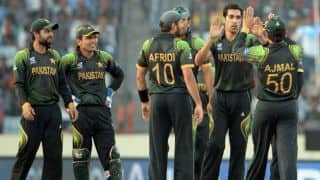