Currently, Australia are 73 for the loss of two wickets in eight overs, against India in T20 World Cup 2016.

Australian batsman David Warner was dismissed for mere six by off-spinner Ravichandran Ashwin, after being stumped by MS Dhoni, against India in the Super 10 Group 2, Match 31 of the ongoing ICC World T20 2016 at the Punjab Cricket Association (PCA) Stadium in Mohali on Sunday. Ashwin bowls a short length deliuvery, as Warner fails to read the turn properly, misses the shot, while Dhoni ends the proceedings with an easy stumping, as Ashwin became the first man to claim 50 T20I wickets. Currently, Australia are 73 for the loss of two wickets in eight overs, with opener Aaron Finch on 32 and Steven Smith on one. LIVE CRICKET SCORECARD: India vs Australia, Super 10 Group 2, Match 31 at Mohali. 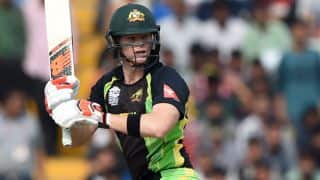