Australian hard-hitting batsman Glenn Maxwell was dismissed by fast-bowler Jasprit Bumrah, after being bowled up by him, against India in the Super 10 Group 2, Match 31 of the ongoing ICC World T20 2016 at the Punjab Cricket Association (PCA) Stadium in Mohali on Sunday. It was a slower one from Bumrah, Maxwell came across the line of the wicket a bit early, and played the shot early, thus failing to read the pace of the ball, as a result, the ball shattering the stumps. Currently, Australia are 132 for the loss of five wickets in 17 overs, with Shane Watson on nine and James Faulkner on one. LIVE CRICKET SCORECARD: India vs Australia, Super 10 Group 2, Match 31 at Mohali 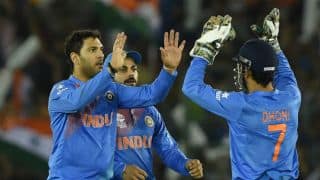