Currently, India are 37 for the loss of two wicket in six overs against Australia in T20 World Cup 2016.

Indian opener Rohit Sharma was dismissed for mere 12 by fast-bowler Shane Watson, after being bowled by him, against Australia in the Super 10 Group 2, Match 31 of the ongoing ICC World T20 2016 at the Punjab Cricket Association (PCA) Stadium in Mohali on Sunday. It was a fine cutter from Watson, fails to read the ball, as he steps out to play a cut, misses completely, as the ball shatters the stumps, while Watson screams a powerful ‘come on’, as Rohit makes his way back. Currently, India are 37 for the loss of two wicket in six overs, with Virat Kohli on 11 and Suresh Raina coming in. LIVE CRICKET SCORECARD: India vs Australia, Super 10 Group 2, Match 31 at Mohali 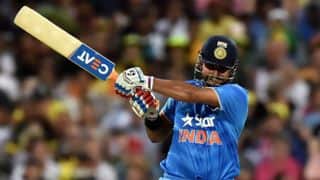