Currently, Australia are 81 for the loss of three wickets in 10 overs, against India in T20 World Cup 2016.

Australian skipper Steven Smith was dismissed for a mere couple by spinner Yuvraj Singh, after being trapped leg-before, against India in the Super 10 Group 2, Match 31 of the ongoing ICC World T20 2016 at the Punjab Cricket Association (PCA) Stadium in Mohali on Sunday. A quick ball from Yuvraj, as he bowls around the wicket, it bounces a little away from Smith, as Smith went for a cut, but the ball hit the pad, as the umpire raised his finger on the appeal. However, replays showed that there was a possible inside edge. Currently, Australia are 81 for the loss of three wickets in 10 overs, with opener Aaron Finch on 34 and Glenn Maxwell on three. LIVE CRICKET SCORECARD: India vs Australia, Super 10 Group 2, Match 31 at Mohali 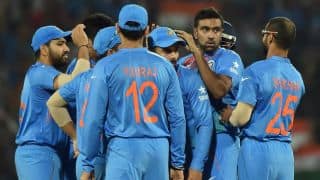