India vs Australia: Here are the talking points from the opening T20I, where the visitors registered a comfortable 11-run victory. 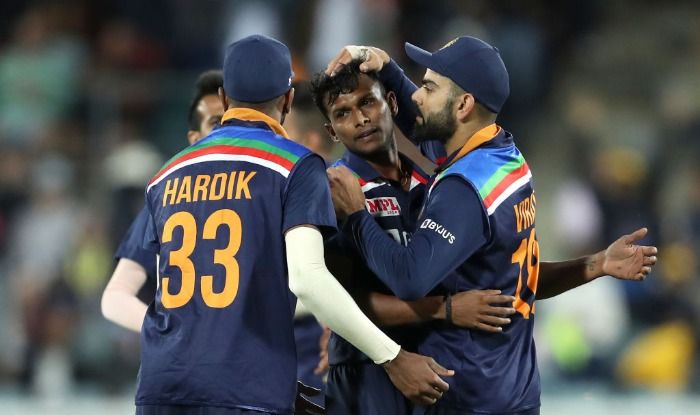 Virat Kohli and Co. started the three-match T20I series on a positive note with a comfortable 11-run victory over Australia in the opening match at Manuka Oval, Canberra. Team India was clinical in the bowling department in the absence of their key pacer Jasprit Bumrah as they restricted Australia to 150/7 in the 162-run chase.

Yuzvendra Chahal, who replaced Ravindra Jadeja as the concussion substitute, picked three wickets for India. However, it was Jadeja who played an astonishing 44* run knock to take Team India to a fighting total of 161/7.

The wrist spinners from both India and Australia impressed everyone during the first T20I. For the hosts, Adam Zampa and Mitchell Swepson shared one-wicket each with economical spells of 1/20 and 1/21 in their quota of 4 overs. Swepson picked the crucial wicket of Indian skipper Virat Kohli on just 9, which derailed the innings in the middle overs. While Zampa got the better of Manish Pandey who was playing his first match of the tour.

Meanwhile, Team India started the match without a wrist spinner in the XI but unfortunately, Ravindra Jadeja got hit on the helmet by Mitchell Starc’s nasty bouncer, which brought Yuzvendra Chahal back in the game as a concussion substitute. The leggie provided the crucial breakthrough to India by dismissing his RCB teammate Aaron Finch for 35, he later got rid of in-form Steve Smith for 12. Chahal finished his quota of 4 overs with 3/25.

Team India need to look out on this matter and try to figure out place for a wrist-spinner in the second T20I against Australia.

The Karnataka batsman has been part of India’s limited-overs squad from the past couple of years but there is still some uncertainty over his place in the Playing XI and most importantly his batting position. Pandey comes out to bat at No. 5 in the first t20I against Australia. It’s a bit tricky for a player like Pandey, who is a technically sounded batsman, to play a floater’s role at No.5. The 31-year-old failed to grab the chance and was dismissed on just 2 by Adam Zampa.

With the top-order already being clustered with a plethora of talents, Pandey needs to find a way to fire at No.5 to stay in contention of next year T20Is World Cup squad.

Natarajan is Ready for Big Challenge

T Natarajan on his debut impressed everyone with his bowling as he scalped three wickets off 30 runs. The left-arm seamer turned the tide in India’s favour after dismissing in-form Glenn Maxwell with a surprise length-delivery on just 2. Natarajan also got rid of opener D’arcy Short, who was looking dangerous and scored 38 runs. While he castled Mitchell Starc with his trademark yorker.

Natarajan’s rise is an excellent sign for the Indian team, who was in search of a quality left-arm pacer from the past few years. The team management tried Khaleel Ahmed but he failed to grab the spot with his below-average performances. While with Natarajan in scheme there is hope for India.

The first T20I between India and Australia was indulged in a controversy regarding the concussion substitute. In the last over of India’s innings, Ravindra Jadeja got hit by Mitchell Starc’s bouncer on the helmet. The southpaw didn’t leave the field at that time and continued to bat without any medical attention to it. Later during Australia’s batting, Jadeja didn’t come out to the field as Yuzvendra Chahal replaced him as the concussion substitute.

It was not a new thing in modern-day cricket to allow a concussion substitute but questions were raised on Team India’s intention to brought Chahal into the game, as Jadeja neither leave the field immediately after getting hit nor he looked uncomfortable with that. Interestingly, he was struggling with some hamstring issue while running which made people cook several stories. Australia head coach Justin Langer was also unhappy when informed by the match-referee David Boon as he had a chat with him regarding that where he looked frustrated with the decision.