India s splendid run in ODIs continued following a thumping 7-wicket victory over Australia to end the five-match series at 4-1. In addition, they but also reclaimed the No. 1 spot in ICC ODI rankings. The spinners did their part and batsmen ruled the roost. Although Ajinkya Rahane and Rohit Sharma stole the limelight, Hardik Pandya proved why he is here to stay for a long time. Initially coming at No. 7, he was promoted to No. 4 in the last few games. Nonetheless, the youngster ensured regular flow of runs from his willow. Pandya scored 2 fifties and bagged key wickets to be adjudged Man-of-the-Series.

Pandya s tally of 222 runs at 55.50 and a strike rate of 108.82, earned him praises from both skipper, Virat Kohli and head coach Ravi Shastri. After the fifth and final ODI at Nagpur, an elated Pandya stated in the post-match conference, When I went to bat at No. 4, got a few runs, and the team won the series. There is always a scope of improvement. I’m just focusing on that, working hard on my fitness. Pretty important to keep myself fit. It’s always a pleasure to play against Australia. I was looking forward to this series. Really happy that I got this award, and we won the series.

Kohli later termed Pandya as the biggest positive of the series. 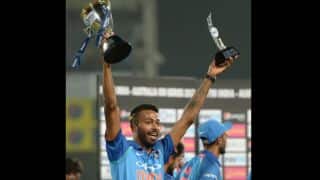