Dhawan was omitted from the Australia Tests which gave the left-hander a six-week-long break ahead of the ODIs.

Shikhar Dhawan reckons spending time away from cricket has helped re-energise him and his preparations for the Australia and New Zealand ODIs. Dhawan was omitted from India s four-Test series Down Under which gave the left-hander a six-week-long break before re-joining the team before the ODIs.

With the series levelled at 1-1, and the decider to be played Friday at the MCG, Dhawan is looking forward to being part of a rare achievement that might see India win both Tests and ODIs. The last time India won an ODI series in Australia was in 2008, when MS Dhoni led India to wins in the first two finals of the CB series. India then went on to lose the tri-series four years later, a bilateral series in 2015 and 2016.

“It will be a big final tomorrow; it’s an interesting game for both teams and of course we are looking forward to an exciting game tomorrow,” Dhawan said before the pre-match press conference. It will mean a lot to us. It’s always good to come here and get a win under the belt; winning both Tests and ODIs (…if we win tomorrow), it will be a big achievement. We will value and cherish it.”

Going back on emphasizing how the break from cricket got him to focus better, Dhawan explained how he followed his trainer s during his time off to get in good shape. Prior to the match, Dhawan hit the nets where batting coach Sanjay Bangar was spotted throwing down tennis balls at the batsman. Dhawan added the drill was to help him adapt better against the short ball.

“I had six weeks off and I was training hard. My trainer assigned me a schedule and I was following that. It was good because with the World Cup approaching, it was a good break for me so I could be fresh and strong. I was doing my basics and now I’m happy being back in the side and playing matches. So yes, I’m raring to go,” Dhawan said.

“It (tennis balls practice) was a drill to keep my muscle memory, reflexes quick while facing bouncers as Australia have quick bowlers. As opener, I make sure my reflexes are quick and even my shot selection is better. Two bouncers are allowed so yea, I’ll be prepared.”

After being dismissed for a golden duck in the first match, Dhawan entertained during his short stay at the crease. His 32 off 28 balls was laced with five crisp boundaries and he partnered Rohit Sharma for an opening stand of 47 in 7.4 overs in India s challenging chase of 299.

“I feel my rhythm was good, the way I was hitting the ball day before yesterday. I can sense it, feel how my batting is faring,” Dhawan said of his knock Tuesday. “Like I said, it is very important to take a break and feel fresh which we, the Indian cricketers, don’t usually get. So it’s good to be back and looking forward to the match tomorrow and then the New Zealand tour as well.” 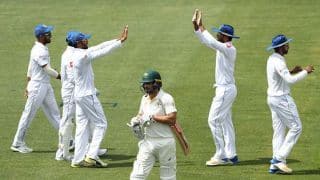