Rishabh Pant’s eighth Twenty20 international for India will see him keep wickets for the first time in the format, after the BCCI on Tuesday announced the touring team’s 12 for the opening match against Australia in Brisbane.

Pant has played seven prior T20Is – he made his debut in February 2017, the youngest Indian to do so – but has played each of these as a specialist batsman. His first two T20Is featured MS Dhoni as wicketkeeper, and since then each match he got a chance in has had Dinesh Karthik donning the gloves: twice during the Nidahas Trophy which India won in March and earlier this month in three T20Is versus West Indies.

In seven T20I innings, Pant has scored 137 runs at a strike-rate of 117.09 with one fifty, scored in his last match against West Indies in Chennai.

With Dhoni out from India’s T20I squads for the home series with West Indies and the Australia tour, the BCCI selectors named Karthik and Pant as the wicketkeepers. The veteran Karthik kept in the last series and now for the first T20I in Australia the management has opted to test out Pant who has played three ODIs – all as specialist batsman – and five Tests, all as designated wicketkeeper. 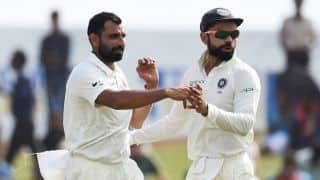