Statistical highlights of the first one-dayer between India and Australia at Pune on Sunday. 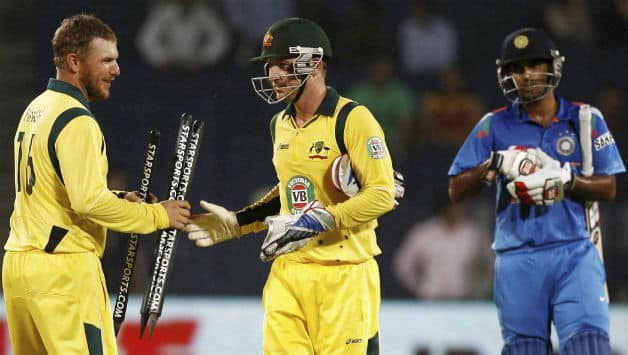 Statistical highlights of the first one-dayer between India and Australia at Pune on Sunday.

# The innings is his ninth fifty in a losing cause in ODIs.

# Aaron Finch (72) has recorded his second highest score in ODIs behind the 148 off 114 balls vs Scotland at Edinburgh on September 3, 2013. The said innings is his first fifty in ODIs.

# Australia have won both the ODIs when Finch has registered fifty-plus innings.

# India narrowly missed equalling their best winning sequence in ODIs. India had won their last eight ODIs in a row before today’s defeat between July 5 and August 3, 2013. Between November 14, 2008 and February 5, 2009, India had won nine ODIs in a row.

# While chasing 300 runs or more vs Australia in ODIs, India have been defeated in all the eleven matches.

# George Bailey (85 off 82 balls) posted his fourth fifty as captain in ODIs — his ninth in ODIs.

# Bailey’s knock is his second highest away from home in ODIs behind the 87 off 91 balls vs England at Cardiff on September 14, 2013.

# Bailey has got his third Man of the Match award in ODIs.

# Mitchell Johnson is the first Australian bowler to complete 25 wickets (ave.26.48) in 15 games against India in India.

# As a pair, Rohit and Virat are averaging 51.37 in ODIs — their tally being 1233 runs in 25 innings, including four hundreds and four fifties.

# Yuvraj Singh (2/34) has recorded his best bowling performance vs Australia in ODIs.

# Raina and Kohli put on 71 for the third wicket — their ninth fifty-plus partnership for all wickets in ODIs.

# James Faulkner (3/47) has produced his third best bowling figures in ODIs. His best ever figures are 4 for 48 vs West Indies at Canberra on February 6, 2013.

India vs Australia 2013: George Bailey’s inexperienced tourists provide signs they are no pushovers after 1st ODI