Statistical highlights of the sixth One-Day International (ODI) match between India and Australia at Nagpur. 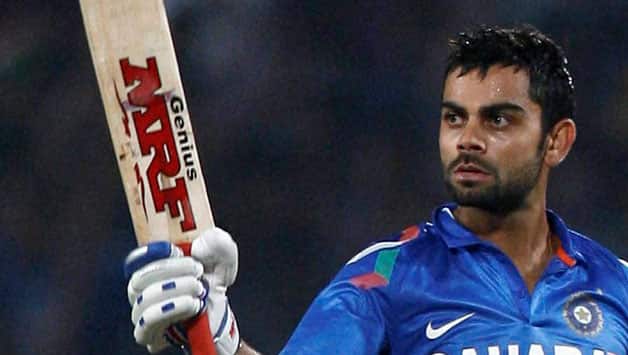 Statistical highlights of the sixth One-Day International (ODI) match between India and Australia at Nagpur.

# Virat Kohli was adjudged the Man of the Match for the 16th time in ODIs — second against Australia.

# Kohli’s 17th century — 115 not out off 66 balls — in ODIs is his third against Australia. He has averaged 86.53 in successful chases — his aggregate being 2596 in 46 matches, including eleven hundreds and twelve fifties. Only Sachin Tendulkar (17) has recorded more hundreds in chases than Kohli in ODIs.

# Kohli is the first batsman to record five successive innings of fifty-plus twice in ODIs. He had first registered the said feat last year.

# Kohli’s 61-ball century is the third fastest by an Indian batsman in ODIs behind the 52-ball hundred by Kohli against Australia at Jaipur on October 16, 2013 and the 60-ball hundred by Virender Sehwag against New Zealand at Hamilton on March 11, 2009.

# Shikhar Dhawan posted his fourth century in ODIs — one each against West Indies, South Africa, Australia and Zimbabwe.

# Watson’s century is his second in a losing cause in ODIs — his first being 116 not out against Pakistan at Abu Dhabi on May 3, 2009. His ninth century in ODIs is his first against India.

# Rohit Sharma (79 off 89 balls) posted his second fifty against Australia — his 19th in ODIs.

# India enjoy 100 per cent winning record against Australia at Jamtha, Nagpur, winning both their games – by 99 runs on October 28, 2009 and by six wickets on October 30, 2013. In all, India have won two and lost two out of four played at this venue – their losses being one each to Sri Lanka and South Africa.

# Australia have registered 300 or more four times for the first time in an ODI series against India.

# Australia have posted 47 sixes — a new record by a team in a bilateral series in ODIs, eclipsing the previous highest of 40 by West Indies against New Zealand in five matches in 2012.

# The first batsman to manage 1,000 runs in ODIs this year is George Bailey — his tally being 1094 at an average of 68.37, including two centuries and eight fifties, in 21 matches.

# Bailey’s 156 is his first century as captain. He has established a record for the highest individual innings by an Australian skipper against India in ODIs, bettering Ricky Ponting’s 140 not out off 121 balls at Johannesburg on March 23, 2003.

# Bailey’a innings is the highest individual knock for Australia against India in ODIs. His knock is the third highest by a captain against India in ODIs, next only to the 189 by Sanath Jayasuriya for Sri Lanka at Sharjah on October 29, 2000 and 158 by Andrew Strauss for England at Bangalore on February 27, 2011.

# Bailey has established a record as captain in a bilateral series in ODIs, aggregating 474 at an average of 118.50 in five innings, surpassing South Africa’s Abraham de Villiers’ tally of 367 (ave.91.75) against Pakistan in five ODIs in 2012-13.

# Bailey’s tally is a record by any batsman in a bilateral series. Zimbabwe’s Hamilton Masakadza had totalled 467 runs at an average of 116.75 in five innings against Kenya in 2009-10.

# Bailey has set a record for the highest individual score at Jamtha, Nagpur, eclipsing Mahendra Singh Dhoni’s 124 against Australia on October 28, 2009.

# Bailey and Watson put on 168 — Australia’s highest third-wicket partnership against India in India in ODIs.

# Dhawan and Sharma managed their fifth century opening partnership this year in ODIs against the most century partnerships by any pair in ODIs in 2013.

# Amit Mishra (10-0-78-0), playing in his first ODI on Indian soil, recorded his worst bowling performance in terms of runs conceded in ODIs.

# Four centuries have been registered for the second time in an ODI — the first occasion was between Pakistan vs Australia at Lahore on November 10, 1998.