Chandigarh: Hockey legend Balbir Singh Sr met the  Indian cricket team members today, wishing them luck ahead of tomorrow’s crucial ICC World T20 tie against Australia. 92-year-old, member of three Olympic gold-medal winning teams, met Dhoni and his teammates at the IS Bindra PCA stadium at Mohali this evening. Balbir Singh, who was part the famous gold winning teams from 1948 to 1956 Olympics, wished the team the very best for tomorrow’s game and hoped that it would lift the title. FULL CRICKET SCORECARD: India vs Australia, Match 31, ICC World T20 2016 at Mohali

Dhoni, on behalf of his team, thanked him and asked him about his health, to which the legend smiled and replied, “your victory contributes towards my good health”. Talking to PTI, Balbir Singh said, “I came today to wish the team to win their third World title and complete their own golden hat-trick.” India won the World T20 title in 2007 and 50-over World Cup in 2011. ALSO READ: India vs Australia, T20 World Cup 2016: Plans to unsettle Virat Kohli have gone in vain, admits Shane Watson

Both India and Australia head into this clash at the PCA Stadium in Mohali with impressive wins in their previous matches. 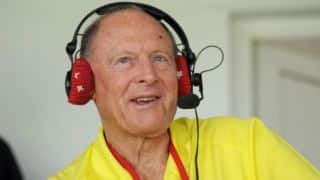