(Can Bangladesh get back to their winning ways after the humiliation they suffered after the second ODI? Or will India finish whitewash the tigers? Catch live cricket score and live updates here.)

The captains and umpires step out on the pitch and the match has been called off due to incessant rain. India win three match series 2-0.

Rain Break:  A huge appeal against Binny and the umpire turns it down. It looked as though Shakib’s loud appeal scared the clouds and it started pouring immediately after. The players have left the field again.

India 51/4 I Overs 16
C Pujara 11(35), S Raina 22(18)
Raina is maintaining his cool and not going for shots across the line. Mortaza is bowling over the wicket and forcing Raina to play on the on-side and hoping for a leg-before. Ends up conceding a wide-ball in the process.
India 49/4 I Overs 15
C Pujara 11(34), S Raina 21(13)
Frst ball from Taskin was cut away by Pujara for a couple. He defends the next delivery and for the third one he plays for the incoming ball, but the delivery held its line, took the edge and fell just ahead of slips. Cuts again but well stopped by the fielder, only one run accrues.
India 44/4 I Overs 14
C Pujara 8(29), S Raina 20(12)
Unnecessary harakiri. Raina blindly went for a tight single on the second ball. Turns back and just about made it thanks to the poor throw from the fielder. Couple of runs on the fifth delivery of the over from Mortaza. Raina on the last delivery punched it through covers and added two more. Good fielding by Taskin in the deep.
India 37/4 I Overs 13
C Pujara 7(26), S Raina 15(9)
We are back. Taskin completes his over and all three were dot balls.

Not a bad theory…

It looks like rain Intervals are directly proportional to fall of wickets! #BANvsIND

India 37/4 I Overs 12.3
C Pujara 7(23), S Raina 15(9)
RAIN BREAK. The only consistent performer in this series has been the heavy rain. Thunderstorms followed by rains, the groundstaff were sprinting with the covers within seconds. This could very well delay the match by at least an hour or two.
India 35/4 I Overs 12
C Pujara 5(20), S Raina 15(9)
Some consolation for Indian fans after a gloomy start. The second ball of the over was short and wide, Raina cuts it neatly past backward point for four. The next one is pitched on the leg, Raina wasn’t going to miss out on such easy ones, flicked for four. A wide ball follows and Raina adds four more on the next delivery with a drive through covers. Played away from the body but was in full control. Three fours have prompted the field changes. Dark clouds gathering over the stadium, looks like there will be a long break in some time.
India 19/4 I Overs 11
C Pujara 3(18), S Raina 2(5)
The second ball of the over by Taskin was played by Raina for a quick single. The fielder dives towards the stumps for an under-arm throw and he takes Pujara and the stumps down as well. Single taken with a leg-bye on the penultimate delivery. First Powerplay over.
India 17/4 I Overs 10
C Pujara 3(15), S Raina 1(2)
Wonder whether India are aiming to set a 58-run target for Bangladesh! Manoj Tiwary departs. This delivery was similar to the one that got Rahane. It was moving in and after pitching seamed away, Tiwary was caught off-guard and edges it to second slip. Unlike Rahane, Tiwary could have left that alone. Skipper Suresh Raina is in to bat. Gets off the mark with a single.
OUT! M Tiwary c Anamul b Al-Amin 2(6)
India 14/3 I Overs 9
C Pujara 3(13), M Tiwary 1(4)
Play resumes after the passing shower. And a ball later Manoj Tiwary would have well been walking back if Sohag Gazi was prepared for the catch. This was dug short and Tiwary went for the slice over thirdman, didn’t the timing and the ball was in the air for eternity. Gazi wasn’t alert and the ball landed inches ahead of him.

The rains have stopped. Covers are being removed. Play should start in about 10 mins #IndvBan

Talking of low-scoring matches, here’s a piece on India’s memorable match against Pakistan where the Men in Blue defended 125 by bowling out their arch-rivals for 87!  Read the Article Here

13:47 local time: So it has been a nightmare for batsmen once again with the pitch having a green tinge and the seamers making the batsmen look worse than tail-enders. The rain will probably add more devils in the pitch. Don’t be surprised if this turns out to be a low-scoring affair again. In other words Bangladesh have enough reason to worry! We’ll keep you updated about the rain break.

India 13/3 I Overs 8.3
C Pujara 3(12), M Tiwary 0(2)
Is this going to be another low-scoring thriller? After a sensational debut, Taskin continues to bask in the glory with wicket first ball. This one bounced from a good length and Rayudu was awkwardly trying to guide it towards thirdman and the ball greased past the gloves to Rahim. Manoj Tiwary is the new batsman in and gets a taste of the pitch second ball. Rain coming down heavily and the players have been called off.
OUT! Rayudu c Rahim b Taskin 1(5)
India 13/2 I Overs 8
C Pujara 3(12), Rayudu 1(5)
Both batsmen playing to the situation. It’s a two-paced wicket and the odd-ball is bouncing a bit. Pujara taps the third ball towards mid-on for a single. The last ball is driven by Rayudu tentatively to the right of thirdman for a single. The economy rate of both bowlers is below two till now.
India 11/2 I Overs 7
C Pujara 2(9), Rayudu 0(2)
Ideal stage for Pujara to fight out out here. The pitch is tough but there’s enough time on offer to claw his way back. He solidly plays out Mortaza throughout the over and on the last ball punches off the backfoot through covers for a single.
India 10/2 I Overs 6
C Pujara 1(3), Rayudu 0(2)
One more bites the dust due to the away going delivery. This was angled in by Al-Amin and after pitching on the seamed away from Rahane. He was trying to close the face of the bat and play it towards the on-side, the leading edge flew to the slips and Nasir takes one more catch. Excellent delivery from Al-Amin. Ambati Rayudu is the new batsman in. India will still be unperturbed, there’s a long batting line-up today.
OUT! A Rahane c Nasir b Al-Amin 3(18)
India 8/1 I Overs 5
A Rahane 3(16), C Pujara 0(1)
Uthappa was at ease facing Mortaza this time around. In the previous match, he was playing for the away movement and found himself hurrying after the pacer got the ball to move in. But Mortaza was up to the task and pitched one at good length wide of off stump and Uthappa tried drive at it without getting close to the ball. The outside edge was caught by Nasir Hossain at first slip. Wicket-Maiden over for Mortaza.
OUT! Uthappa c Nasir b Mortaza 5(13)
India 8/0 I Overs 4
R Uthappa 5(8), A Rahane 3(16)
Rahane still looking scratchy. Picks a couple on the second ball playing towards square-leg. On the third ball, he is beaten by the inward movement once again. Al-Amin bowls a brilliant fourth ball pitching it at good length and zipping away from the bat. Lucky for Rahane that didn’t brush past his edge.
India 6/0 I Overs 3
R Uthappa 5(8), A Rahane 1(10)
Mortaza is getting the ball to move. The first ball jagged back in and Uthappa was caught off-guard trying to leave it alone. The next ball is played towards mid-on for a single. Rahane then continues to be cautious, playing from out of his crease to negate the movement. On the last ball he tentatively sliced past point for a single. Could’ve been closed if he hadn’t timed that.
India 4/0 I Overs 2
R Uthappa 4(6), A Rahane 0(6)
Looks like this might be a sluggish wicket. Al-Amin Hossain starts from the other end and doesn’t get much bounce. The first ball is defended by Rahane and the second one is flicked. Square-leg manages to stop the ball. It was a similar shot to which Rahane got out in the previous match. Rahane fails to capitalise a short and wide fourth ball. He is beaten once again on the fifth one. Finally manages to get one from middle of the bat but hits straight to point. Maiden over from Al-Amin.
India 4/0 I Overs 1
R Uthappa 4(6), A Rahane 0(0)
Short of good length first-up from Mashrafe Mortaza and Uthapa quietly plays it towards point. The next ball is outside off and left alone by the batsman. Uthappa defends the next two balls. The fifth ball, was tentatively pushed but there and the timing was good enough to send it to the boundary.

Toss:  India have won the toss and elected to bat.

In: Manoj Tiwary   Out: Amit Mishra

In: Sohag Gazi    Out: Ziaur Rahman

Hello and welcome to CricketCountry’s live blog of the India vs Bangladesh third One-Day International (ODI) at Dhaka. I am Abhijit Banare, and I will be bringing you the live updates of this match. After being put in a very tough position, the Indian bowlers came out with roaring conviction to pull off an astounding 47-run win for their side. India have won the series, and Bangladesh will be playing for pride. Catch the Preview of the third ODI here.

In today’s match, Bangladesh will be hoping for an improved all-round showing. They will want to forget their batting performance, and avoid the errors of the previous game. Their bowling was excellent, but the batsmen let them down immensely. Taskin Ahmed will be looking to have another crack at the Indian top order.

India, on the other hand, might look to try out a few other players who have been on the bench. Mohit Sharma has been in excellent form, but Vinay Kumar is a likely contender to get a game. Whether skipper Suresh Raina opts to have both Stuart Binny and Parvez Rasool at the cost of Akshar Patel will be interesting to see.

Catch the Photo Gallery of the second ODI here

Catch complete coverage of the India vs Bangladesh series here 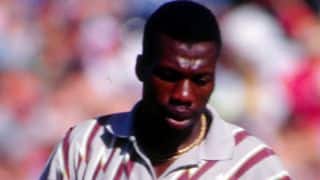 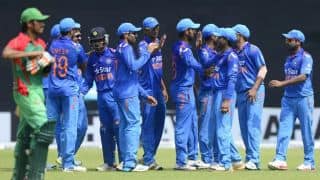