BCB president Nazmul Hassan has said that some players including Shakib could skip the upcoming India tour, for which the team is scheduled to leave on Wednesday

The drama in Bangladesh cricket is far from over. Days after players ended their strike, it’s learned that veteran Shakib Al Hasan has not turned up for the team’s training sessions on two out of three days so far.

The explanation Bangladesh Cricket Board (BCB) has given is not very convincing. BCB have amplified coach Russell Domingo’s message that Shakib had been left out of Sunday’s practice match as he wanted to look at other players. However, Shakib’s name was on the list of players expected to attend.

Meanwhile, in an interview with Bengali daily Prothom Alo, BCB president Nazmul Hassan has said that some players including Shakib could skip the upcoming India tour, for which the team is scheduled to leave on Wednesday. The allrounder’s absence will be a huge blow for the side that will already missing out on Mohammad Saifuddin who has already been ruled out due to a back injury while Tamim Iqbal has opted out to be with his pregnant wife.

“I am quite sure that they [the players] won’t go, and they will only inform us when we have nothing to do about it,” Hassan said in the interview.

“I don’t know. I have called Shakib today. Let’s see what he says. It might be others too. I don’t know. But I had information that they won’t go. Now things have quickly changed [vis-a-vis the strike]. They didn’t think it would all change so quickly. I am not saying this after hearing it from a trusted source. If they say on October 30 that they won’t go, what will we do? We have to change the entire combination. Where will I get a captain from? You tell me what will I do with them?”

Adding fuel to the fire, the BCB has called Shakib’s recent sponsorship deal with Grameenphone “unlawful”. Hassan said that the board categorically asked their players not to sign contracts with any telecom company.

Some of Bangladesh’s players and coaching staff have been called up to a meeting with BCB president, less than an hour before their practice match is scheduled to begin in Mirpur. pic.twitter.com/3oliR7lDaf

“We told the players not to do any deals with telecom companies, so that they can participate in the tender [for team sponsorship] next year. Can Shakib do this unlawful thing knowing everything? Should I allow them to do just about anything?

“Look at the timing too. I won’t get the telecom companies in the January tender. Even if they do come, it will be for a lower price. Who is getting hurt in this? Only one player is profiting, but what about my team?”

The BCB has sent a showcause notice to Shakib to explain his side of the story. An update is expected later in the day after the last training session in Mirpur. 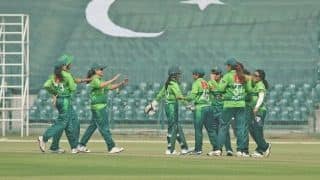 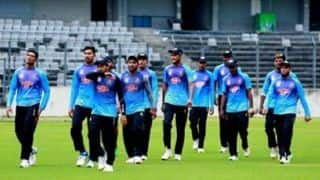