India vs Bangladesh 3rd ODI called off due to rain; visitors take series 2-0

India vs Bangladesh 3rd ODI called off due to rain; visitors take series 2-0

India were struggling at 119 for nine before a third cloudburst any chances of play resuming.

India slumped to yet another low score against Bangladesh in the third and final One-Day International(ODI) before a third interruption from the rains made it impossible for play to go on. There was  heavy downpour twice in the innings and apart from Suresh Raina and Cheteshwar Pujara, none of the other batsmen could get their eye in on the difficult Shere-e-Bangla wicket. Wickets fell at regular intervals and Shakib al Hasan and co were excellent yet again after the match was reduced to a 40 over-a-side game. There were excellent bowling displays from the latest sensation Taksin Ahmed and Al Amin Hossain too.

After Raina elected to bat on a wicket that was not dissimilar to the second game, India’s batting pattern bore a spitting image of the low-scoring game. Robin Uthappa and Ajinkya Rahane struggled for runs with Al-Amin Hossain steaming in and firing deliveries in the corridor outside  off-stump. Al-Amin along with Mashrafe Mortaza probed for answers and they were rewarded soon with Uthappa nicking the ball to Nasir Hossain at first slip for a near-unplayable delivery.

The bowlers settled into a steady rhythm and Rahane fell in identical fashion to his opening partner. Same line and length and Mortaza also got on the act. The latest sensation Taksin Ahmed was brought on and he carried on from where he left in the previous game and snapped Ambati Rayudu off a peach. With a hint of movement into the batsmen, Taksin got Rayudu’s glove and Mushfiqur took a safe catch. More damage lay in store for the visitors and in what was his return game, Manoj Tiwary fished outside his off-stump and was caught by Anamul Haque at second slip. India were 15 for four and a heavy downpour helped the visitors regroup in the dressing room.

Suresh Raina then came back with a positive intent and struck three handsome boundaries of a Mortaza over and the scoreboard made for better reading. After skipper Raina and Cheteshwar Pujara steadied the ship with good calculated and and cautious cricket, Shakib al Hasan stuck a crucial breakthrough for Bangladesh against India in the 3rd One-day International (ODI) at Dhaka.  It was a contentious call by umpire Enamul Haque when the southpaw tried to sweep a turning delivery down the leg side and was caught by Mushfiqur Rahim . The Bangladesh players were cock-a-hoop and the umpire slowly raised his finger after the fielders persisted with their appeals. Wriddhiman Saha then played a poor shot to throw his wicket away.

It was a straight ball by Shakib and Saha misread the delivery to play a cut shot and the ball crashed onto the stumps. India soon lost their seventh wicket. It was Shakib who was the wrecker again. The left-armer’s arm-ball deceived Pujara and he was adjudged leg before. It was a rather gutsy knock by Pujara. Taksin then came back in his second spell to induce an edge of Akshar Patel. Mohit Sharma was then trapped in front and there was yet another cloudburst and that would bring down the curtains on the match and series.

(R Vishal is a journalist and alumnus of Asian College of Journalism. He can be followed on Twitter@vishhell) 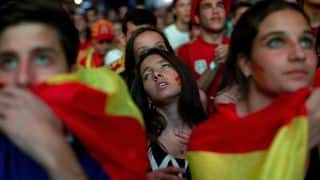